Imran and Reham Khan tie the knot in Bani Gala

Imran and Reham Khan tie the knot in Bani Gala 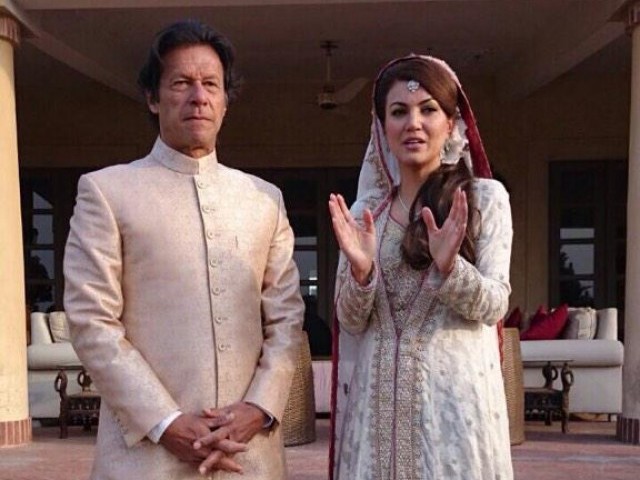 PESHAWAR: The most talked about wedding of the season took place today with Mufti Syed having conducted the nikkah between Imran Khan and Reham Khan at Imran’s Bani Gala residence, Express News reported.

Speaking to the media after conducting the Nikkah, Mufti Syed said, “Imran Khan sb asked me to speak on his behalf to the media, his Nikkah just happened and the witnesses included Aun Chaudhary, Zakir Khan, Reham’s friend Aziz and others.”

Further, Mufti Syed refused to comment on whether a Nikkah between the two had been conducted earlier. Earlier, Syed said while speaking to reporters, “The good news you have been waiting for, I have come here for that.”

“The event was a low key affair because we did not want to celebrate due to the Peshawar school massacre,” Ismail said while speaking to the Express News.

Further, he said close friends and family attended the ceremony.

Earlier, there were reports that Imran’s wedding may also be a fundraiser for the PTI chief’s Shaukat Khanum Cancer Hospital, which is currently under construction in Peshawar.

However, the reports were rubbished by PTI leaders. Talking to The Express Tribune, PTI’s Arif Alvi said it was the first he had heard such reports and he was completely in the dark when it came to Imran’s wedding plans.

“There are no wedding or Valima receptions. Tomorrow food will be distributed amongst poor children,” Mazari added.

A local Urdu newspaper on Thursday reported that the politician and his close aides are discussing certain proposals to raise funds at the Valima ceremony.

It is being proposed that the Valima ceremony will be held in four main cities — Peshawar, Islamabad, Karachi and Lahore. While Valima cards will only be given to those who ensure contribution for the completion of the cancer hospital in Peshawar.

A total amount of Rs500 million is expected to be earned from Imran’s Valima celebrations. After weeks of rumours and speculation, on Monday Imran confirmed he had good news to share regarding his marriage with the nation. Imran has married Reham Khan, a journalist who formerly presented the weather on the BBC. For what we already know about the woman speculated to be the PTI chief’s newlywed read here.

I want to thank everyone for their good wishes on my marriage & would ask those wanting to send a gift to donate to SKMTH Peshawar instead.

Thank you for all your kind wishes.We would appreciate that instead of sending us presents if you could donate to SKMT Peshawar.

The PTI chief was previously married to Jemima Khan, nee Goldsmith and has two sons with her, Qasim and Suleiman.

No crisis, but Ancelotti concerned by passive Real