Israeli drone crashes in Lebanon for second time in 3 weeks

Three women on course to make US Army Rangers history A total of 19 women began the training program in April but 16 have been eliminated. PHOTO: AFP
WASHINGTON:

Three women are on course to make US Army history by becoming the first females to graduate from the elite and hugely demanding Ranger School, officials told AFP Friday.

The three women and 158 male counterparts finished the most selective portion of training, known worldwide for its difficulty, and will now take on its next phase in the mountains of the US state of Georgia.

A total of 19 women began the training program in April but 16 have been eliminated.

The Ranger School welcomed women for the first time this year, following President Barack Obama's 2013 request that the Pentagon order all branches of the armed forces to open up ground combat jobs to women by 2016.

"Most of the students who are not successful have already left the course," Colonel David Fivecoat, commander of the Ranger training brigade, told AFP.


"Once the Ranger students move to the mountains, they have six more weeks of conducting combat patrols over tough terrain with heavy rucksacks, two meals a day, and limited sleep before them," he said, adding that a Florida phase comes after that.


Ranger School is an elite training program reserved for the most physically fit and soundest of moral fiber in the US Army, who feed into the 75th Ranger Regiment, an elite special operations force.

The fate of the three remaining women is being closely monitored by the military community, where women in combat is still divisive. 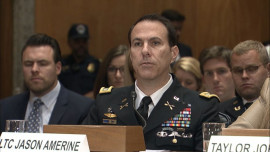 Operation near kabul: US raid on arms cache incites protests