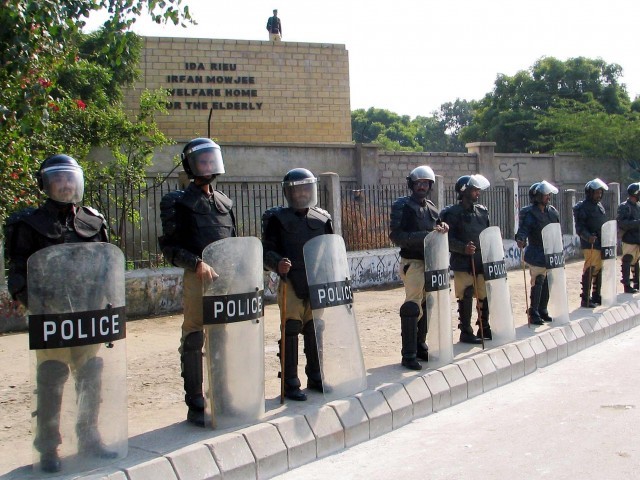 Tight security arrangements were put in place throughout various cities and towns in the country ahead of Muharram processions which began today (Thursday) and will continue tomorrow (Friday).

The procession routes in Karachi have been sealed by containers and bomb disposal squad and sniffer dogs are continuously sweeping the area. More than 5,000 police and 4,000 Rangers personnel have been deployed across the city to protect the procession, Express 24/7 reported. According to an earlier report in The Express Tribune, a security official had said 6,000 Rangers personnel would be deployed across the whole of Sindh. The city of Karachi is distributed into three zones, where the Rangers personnel will be on duty. The main processions will be monitored in the Command and Control Room through CCTV cameras while smaller processions will also be provided security by the Rangers.

In Lahore, 600 Rangers have been put on guard for processions till Muharram 10th. Some 20,000 Punjab policemen have been deployed in Lahore. Superintendent of Police (Security) Faisal Rana had earlier briefed that the route of the main procession in Lahore had been cleared and surrounded by barbed wire barricades, and 27 cameras would be installed in Mochi Gate, where the main mourning procession will begin. Pillion riding has also been banned in Lahore for two days and helicopters are monitoring sensitive locations.

The Muharram procession in Karachi will start from Nishtar Park, pass through its traditional route which includes Numaish Chorangi and reach Imam Bargah Ali Raza where Zuhr prayers will be offered. Later the procession will pass through MA Jinnah Road, Bolton Market, Bombay Bazar and end at the Imam Bargah Hussainia Kharadar.

Similar processions will be taken out in other towns and cities of Pakistan.