Moving mountains: the grandeur of Skardu

Moving mountains: the grandeur of Skardu 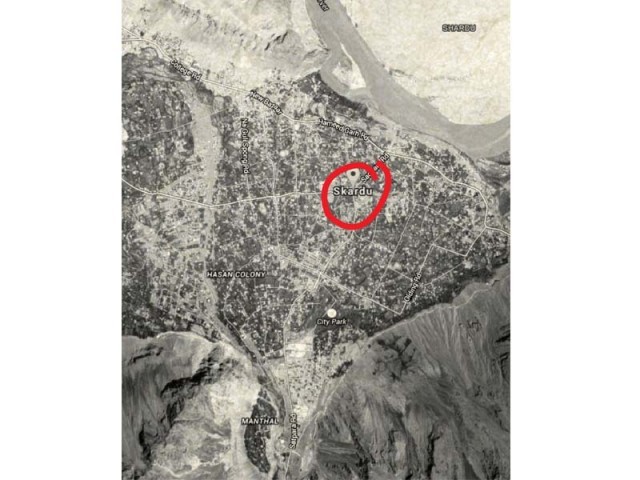 A trip to Skardu takes you comfortably close to nature: walking up steep roads winding through towering mountains, stopping by a stream to refill your bottle with chilled water and popping dried apricots in your mouth as you take in the breathtaking views. The tranquil town in Gilgit-Baltistan is a starting point for most trekking missions and has many sightseeing gems to offer. From Buddha Rock and Satpara Lake to Shigar Fort, Skardu offers an intriguing blend of history and nature.

Accessible only by foot, the Upper Kachura Lake is a pristine pool hidden between barren hills. The 70-metre-deep lake freezes in winter, allowing children to play cricket on ice, while in the  summer, tourists and locals throng to its banks to take a dip in the clear waters. If you want a peaceful moment to soak in the beauty, take a 10-minute boat ride to the other end or enjoy a cup of piping hot tea and fried fish at the blue-coloured teahouse near the end of the lake.

Sitting silently at the boundary of the Karakoram Mountains, the Deosai plains —famously known as ‘the land of the giants’ — is one of nature’s underappreciated gifts. The flat land, which stretches 4,000 metres above sea level, resting calmly in the arms of the mighty range, is among the world’s highest plains. A short drive into the plains takes you to Sheoasar Lake, also known as the ‘Blind Lake’. Though ideal for picnics in summer, the freezing winds that blow here during the colder months make it almost impossible to enjoy the surrounding beauty.

Built during the 17th Century, this colossal fort is around 1,400 metres above the city and is only accessible by a 30-minute uphill trek. The path is tricky to say the least: it starts off smoothly, but as you ascend, the rocks under your feet begin to give away and the slope only gets steeper as you near the Fort’s entrance. The struggle doesn’t end there. The Fort’s massive wooden door is kept shut, which means that one can only enter by squeezing through a small window-like opening. As you explore Kharpocho, you yearn to go back in time: witness the king standing in one of the balconies, admiring his kingdom and overseeing his royal servants climb the unfriendly mountain, as they carry water vessels for the bath; behold the queen combing her hair in one of the rooms ventilated in a way such that they remain cool even during summer, or see the royals gather for a meeting at the Masjid-e-Panjatun Pak in the courtyard. The Kharpocho Fort is not just an architectural marvel, designed as a luxury living quarter, but a cleverly crafted structure, and legend has it that it includes a hidden tunnel within the mountain used by the royals during times of war.

No picture can do justice to this heart-shaped body of water. The red-top pagoda guesthouses around the lake cast their magical reflection in the still waters, adding to the lake’s scenic value. If you observe the waters closely, you can see trout swimming fearlessly here, as though they know that fishing in the lake is not allowed.

Nestled in the middle of the mighty Himalayas, Shangrila Lake is about 2,500 metres above sea level. Also known as Lower Kachura Lake, it is located inside Shangrila Resorts ― a popular tourist destination. From a distance, the lake looks like a glass floor and it takes a boat ride across to believe it is actually water. Shangrila Lake in all its glory. PHOTO CREDIT: MARYAM TARIQ

Although it’s one of the smaller lakes in the region, Shangrila Lake gets its fair share of tourists. A 20-minute hike inside the resort takes you to a vantage point from where you can get a bird’s eye view of the lake. For a city dweller like myself, there were moments when I thought my feet would give way, but I trudged along with the promise of a spectacular view. And once I reached the top, I knew it was worth it.

Ferya Ilyas is a senior subeditor at The Express Tribune. She tweets @ferya_ilyas