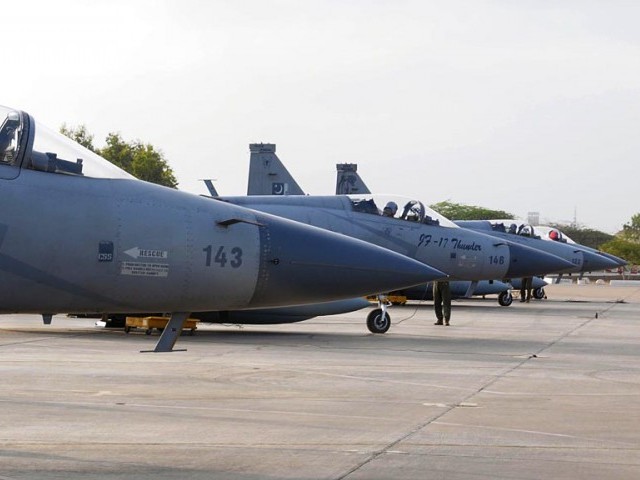 ISLAMABAD: A three-ship formation of JF-17 Thunders along with a PAF contingent comprising pilots and technicians are set to participate in the upcoming Paris Air Show 2015.

The contingent departed for Paris on Sunday.

The 51st Air Show, organised by the French Aerospace Industries Association, is starting on June 15 at the Le Bourget Parc des Expositions and will continue till June 21.

According to a PAF statement, one JF-17 aircraft would perform in the flying display, while another would be on static display throughout the air show.

It is a lightweight multi-role aircraft jointly developed by PAF and China Aero-technology Import Export Corporation (CATIC) and co-produced by Pakistan Aeronautical Complex (PAC) and CATIC.

It was announced earlier during the year that China would deliver another 50 JF-17 Thunder fighters to Pakistan over a period of three years.

During a recent visit by Chinese President Xi Jinping to Pakistan, it was asserted by both sides that the jets were a symbol of friendship between the two countries.

Five Hazaras gunned down in Quetta