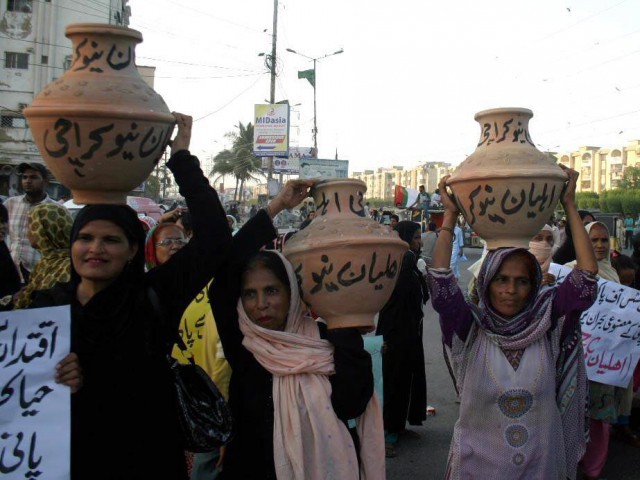 Women from North Karachi and New Karachi held pots on their heads, trying to paint a picture of Tharparkar which they fear Karachi will turn into if the water shortage is not addressed soon.

These protesters were part of the Muttahida Qaumi Movement’s (MQM) city-wide protests that kicked off on Friday evening at North Karachi’s Powerhouse Chowrangi but will continue in different neighbourhoods for the next few weeks.

Hanifa, an elderly woman from Surjani Town, came along with her daughter-in-law to condemn the city being hijacked by the tanker mafia. “They charge Rs3,000 per tanker, which hardly fills our need for a week,” she pointed out, adding that it is unaffordable when their monthly income is no more than Rs12,000.

Meanwhile, the area’s lawmaker, Sheikh Salahuddin from the MQM, shared the same sentiments with The Express Tribune. “They [residents] are compelled to use water tankers, which they cannot afford.” Sindh opposition leader Khwaja Izharul Hassan said they wrote to the CM before taking to the streets.

Meanwhile, Pakistan Tehreek-e-Insaf’s Karachi president Ali Zaidi blamed the MQM and the PPP for the prevalent water crisis. Speaking at a press conference on Friday, Zaidi said the crisis did not emerge in a day. “Both these parties have been in power for years, why didn’t they solve the issue then?” Zaidi also announced that the district teams of his party will start protests against the water crisis from Saturday.