The House of Ensemb­le shifte­d venues this week, moving to an area in Clifto­n that boasts two of the ‘must be seen’...
By Saadia Qamar
Published: April 25, 2010
Tweet Email 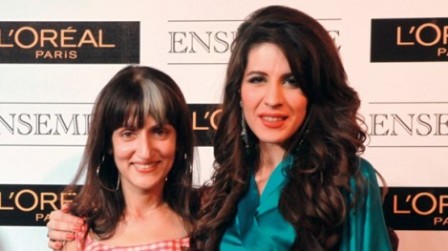 KARACHI: The House of Ensemble shifted venues this week, moving to an area in Clifton that boasts two of the ‘must be seen’ restaurants in the city: Cafe Flo and Koel.

While fashionistas gawked at the models in their glass enclosures, the store’s environs were jam-packed with women trying on the new collections. Husain told Express News, “We wanted to do something different and wanted the shop to be a part of the show.” With L’Oreal Paris and their brand spokespeople as partners for the event, the installations were alluring , set to thumping music, and reminded one of shop windows abroad that feature extensive styling and window dressing. Ensemble stocks some of the most sought-after designer labels in the country, and will also put an end to shopping treks to India.

The new lineup boasts accessory designer Mahin Hussain as well as Chamak and Muse, and from India, Simar Duggal, Fab East and Sabyasachi Mukherjee join Ritu Kumar and Tarun Tahiliani. Hassan Sheheryar Yasin told The Express Tribune, “I am based in Lahore and Punjab is my hometown, but I wanted to present something unique for Karachi. It’s the hub of all commercial activity and it has given us so much. My pret collection can be worn not only at weddings but also as evening wear.

More importantly, I want my client to look beautiful. So it is for the beautiful people in town.” Sadaf Malaterre showcased the collection she showed at PFDC Fashion Week in Lahore. “My work is hip and fun. It is definitely more bohemian than ever before.” At the event designers Umar Sayeed, Sana Safinaz, Nomi Ansari, Faiza Samee, Sadaf Malaterre bumped shoulders with a slew of socialites and members of the fashion flock including Frieha Altaf, Tapu Javeri and advisor to the Sindh chief minister, Sharmila Farooqui. Frieha Altaf was all praise, likening Ensemble moving to a bigger space with the growth of the fashion industry.

She told Express News, “I am very happy whenever the fashion industry grows and expands. The synergy that Zeba Husain created with the TRC shows (that brought in designers like Rohit Bal and Manish Malhotra and celebrities such as Shilpa Shetty and Arjun Rampal) led to Ensemble opening and now moving to a bigger space. It is great to see Indian and Pakistani designers stocking side by side at Ensemble and this is a huge success story.”

What’s in a name?