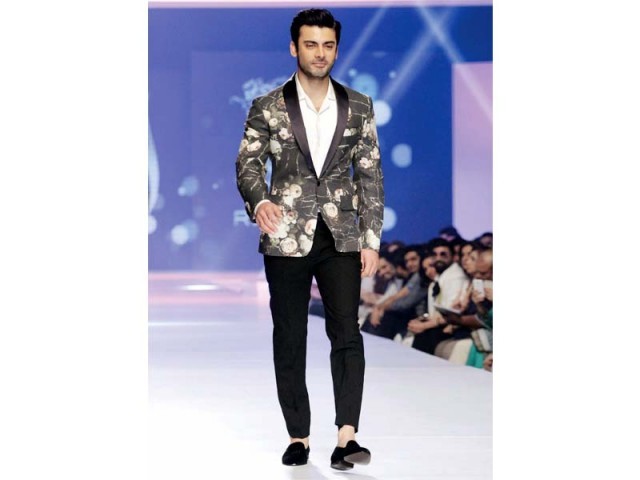 LAHORE: The final day of PFDC Sunsilk Fashion Week was a well-rounded affair, with showcases by notable designers. Exuding grace, the ramp was blazing with colour and fashion-forward style techniques. With a bagful of hits and misses, the four-day fashion extravaganza managed to end, not with a bang but a whimper. The master showman closed PSFW 2015 with ‘INK’, an organised collection inspired by his travels to Asia. His inspiration from the Japanese kimono was evident in women’s wear and the liberal use of bold hues and striking wide belts added drama to the ensembles. The men’s apparel flaunted extraordinary prints lined with hints of yellow. The collection was chock-full of cohesive elements that radiated a classy appeal. Maskatiya compiled a stellar collection titled ‘Paristan’, especially crafted from luxe fabrics, such as silk, organza, crepe and charmeuse, made into ensembles that were structured and fluid at the same time. The colour palette was magnificent since it complemented the cuts of the outfits. There were quite a few favourites from the collection, such as the one showcasing the combination of mustard and yellow and the olive-green coatee sported by models. She collaborated with Rema for jewellery and Charles and Keith for footwear to round off the demonstration of her clothes. The designers showcased a strapping collection, making the most of monochrome tones against rushed pops of colour. Their employment of clean cuts and structured silhouettes really worked for them. They displayed two divergent styles, one with vivid hues set off by solid shades and the other, comprising monochromes teamed with effective embellishments. They incorporated the international trend of obi belts into the collection and depicted the art of structured cuts with finesse. The duo presented a joint collection for the first time. Titled ‘Symphony’, the range amalgamated their distinct styles to create a unique mix of outfits. Some of the waistcoats for men were innovative and fresh otherwise the collection presented nothing we haven’t seen before from the couple’s individual brands. Repetitive cuts and over-ornamented details made for fashion over-kill. Amera’s collection ‘The World of Sea’ was perhaps the weakest offering of the night and blurred the lines between prêt and bridal wear. Her compilation was gaudy and over-embellished and wasn’t too pleasing to the eye. Set in tones of blue, the silhouettes were boring and the long dresses, skirts and flared pants were predictable.

The House of Arsalan Iqbal Titled ‘Devolution Chic’, Iqbal’s collection failed to attract attention. The designer’s inspirations were stirring but not fashion-forward. The showcase was compromised by the use of odd pairing of accessories; jewellery and footwear designer Sanki may not have been the best ally for the brand. The compilation comprised attention-grabbing patterns inspired by Pacman and calligraphy on chiffon. Also, the low quality of cloth was evident and reminded us of fabric bought from China and Thailand. The noted brand’s collection was more appropriate for a bridal show, but it was visually appealing nonetheless. Titled ‘Mizaj-e-shahana’, it took inspiration from Mughal royalty and their imperial aesthetics. A completely traditional collection, it featured angrakha-peplum tops, embellished cigarette pants, boxy sleeves, A-line silhouettes in pastels and jewel tones. The menswear comprised waistcoats, jodhpurs, sherwanis and kurtas —  all emitting a sophisticated, deluxe feel. Khan’s ‘The Untainted Shine’ certainly lived up to its title as it was nothing more than a display of over-embellished outfits. It consisted of a few noteworthy design elements, such as flowy organza skirts, elegant florals, bright hues and net-lined fringy shirts. Musician Gohar Mumtaz and his wife walked the ramp as showstoppers, which gave an average collection a finale worth remembering. Contributing a variety of formal and casual wear to the ramp, Republic by Omar Farooq put forth a crisp collection titled ‘Que Sera, Sera’. The line was built entirely around the label’s signature aesthetics. While some ensembles lacked finesse, the collection exuded a classy appeal overall. Fawad Khan walked the ramp as the showstopper and riveted the crowd’s attention. ‘Contained Shadows’, the collection was enthused by the two opposing sides of human nature. Riaz composed a set of works, which integrated soft and sturdy elements simultaneously, such as the dress Mehreen Syed donned with a structured leather top and flowy florid bottom. He amalgamated corsets, bustiers and cage crinolines with denim, metal and organza and the result was a very out-of-the-box collection. It will be interesting to see if and whether Riaz translates this from ramp to retail.