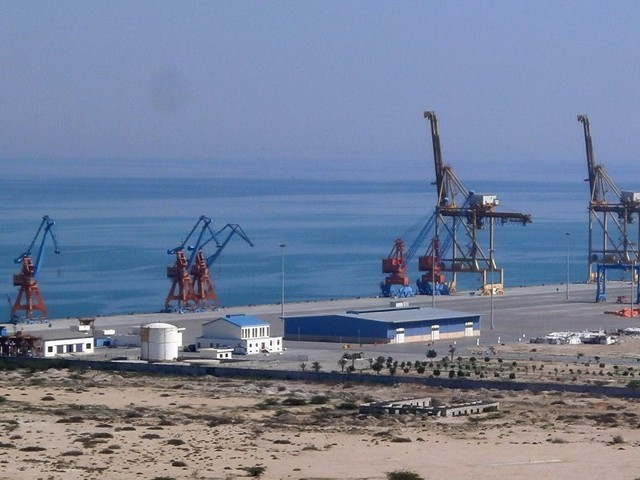 The port authorities acquired possession of 2,231 acres of land at the beginning of the year from Pakistan Navy and Pakistan Coast Guard for establishing free-trade zones. PHOTO: AFP

“The first commercial ship will dock at the port and a new ship lane will be in operation thereafter,” said the MD. “Our target is to make the port fully operational this year.”

The port authorities acquired possession of 2,231 acres of land at the beginning of the year from Pakistan Navy and Pakistan Coast Guard for establishing free-trade zones.

The ECC also approved a 23-year tax holiday for Gwadar Port in an attempt to make it a commercial hub by attracting investors.

Chinese President Xi Jinping, who is scheduled to visit Pakistan this month, is also expected to discuss port-related issues and sign a number of agreements in this regard.

Jamaldini further informed that infrastructure development at the port was in final stages, while work was in full swing to establish free-trade zones, where a large number of national and international companies have started setting up business centres.

“After the completion of the northern portion of the M-8, shipping containers will not come to Karachi from Gwadar, but would go directly to the northern parts of the country via Uttal, Khuzdar and Sukkur,” he said. The construction of this route will save 400km distance, since at present, the shipping containers go from Gwadar via Uttal, Karachi, Hyderabad and then to Sukkur.

According to Jamaldini, Chinese authorities were almost done with their planning exercise and had shared their plan with port authorities.

He also informed that a large number of national and international companies had shown interest in establishing their business centres at the free-trade zones.

“A Memorandum of Understanding has been signed between the Gwadar Port Authority and the mayor of Chinese city Zhuhai. The two parties will shortly sign another agreement to use each other’s ports for commercial purposes for ten years,” he said. “Besides using the port, Zhuhai port authorities would also train the Gwadar port staff.”