State of play: In conversation with Ahmed Rashid

State of play: In conversation with Ahmed Rashid

“We are the most friend­less nation in the region,” he said
By Our Correspondent / Photo: AYSHA SALEEM
Published: March 29, 2015
Tweet Email 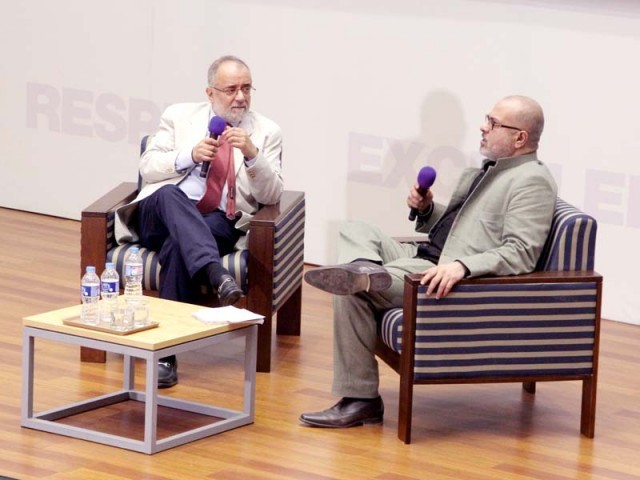 If you look up Ahmed Rashid on Wikipedia, the entry describes him as a journalist, a best-selling author and a former Pakistani militant.

This is how he was introduced as the first speaker of the Dean’s lecture series at Habib University on Friday evening.

The crowd chuckled as many audience members were well-aware of Rashid’s body of work — his books have been republished in several languages, including Pashto, Dari and Hindi. Many of his books, including Taliban: Militant Islam, Oil and Fundamentalism in Central Asia, are on the core reading lists for many international relations and policy courses around the globe.

As he came up on stage, Rashid, who has written extensively on foreign policy issues in South and Central Asia, said despite his ‘guerilla’ past he used to be a lecturer at the National Defence University — then a college, where he was eventually banned. According to Rashid, his teachings were not in line with the government’s policy so before he could start his lesson, General Hamid Gul used to give his lecture where he would explain the students what the government wanted them to know. Rashid was the ‘alternative point of view’ on Afghanistan, the Taliban and America.

“We are the most friendless nation in the region,” he said. “Except for the Gulf states. If we follow them into Yemen, we will be making a grave mistake.” He added that we were fighting proxy wars, giving sanctuaries to militants and housing those who we should turn in.

Giving a brief history of which militant organisations were present in the country, Rashid said that at first there were the Kabul and Kandahar Shura, now it was the Quetta and Peshawar Shura.

“The alQaeda has been here since 1985. Several others such as the Islamic Movement of Uzbekistan are also based in Pakistan now,” he said. “These foreign groups have extended their leadership and base to Paksitan. They are no longer foreigners. They married local women, bought homes and made investments here.”

He explained that the network of these groups had strengthened over time — the locals were recruited to fight, they made a lot of money and marriage made the bonds stronger. “If you are sitting next to an alQaeda militant all day,” he said. “You will become radicalised.”

This worsened Pakistan’s ties with Afghanistan. After a while, the Afghan government started giving the Pakistani Taliban shelter (soon after the Swat operation). According to Rashid, this is when both countries and the militants adopted a tit-for-tat policy where the Afghan Taliban were using Pakistani territory to attack Afghanistan and visa versa.

Talking about wars with India, Rashid said that there was 1948 where the army first used jihadi fighters in Kashmir — then in 1965, General Ayub Khan and his men made soldiers dress as jihadis and used them in warfare. What happened in 1971 and Kargil, he added, was no secret to anyone. By the time Kargil happened, he said, both countries had reached the brink of nuclear war — all they had to do was press one switch.

According to Rashid, what was interesting was that Pakistan had fought all these wars with jihadis — even the conventional ones.

According to Rashid, there were three turning points in the last three decades — when the USSR invaded Afghanistan, the end of the Cold War and 1992 — when, if the government had amended its policy, things could have been different.

“The policy choices we made in the 1990s were much more disastrous than those made by General Ziaul Haq,” he said. “Post 9/11, all our loans were forgiven. We received more than $20 billion in aid and helped launch Hamid Karzai. What did we want? More F-16s.” He added that today, were seem to be on the right path with the Afghans.

According to Rashid, there is no country in this region that does not want stability in Afghanistan. He said that peace talks between Kabul and the Afghan Taliban could be beneficial for Pakistan as it will weaken the ones in Pakistan.

“We have a lot to be blamed for but its not even close to how the Americans have messed up in Afghanistan,” he said. “We have to be able to stand on our own feet. Unfortunately, we have never learnt to do this.” He added that we needed to say no. “We don’t need allies. We need trading partners.”