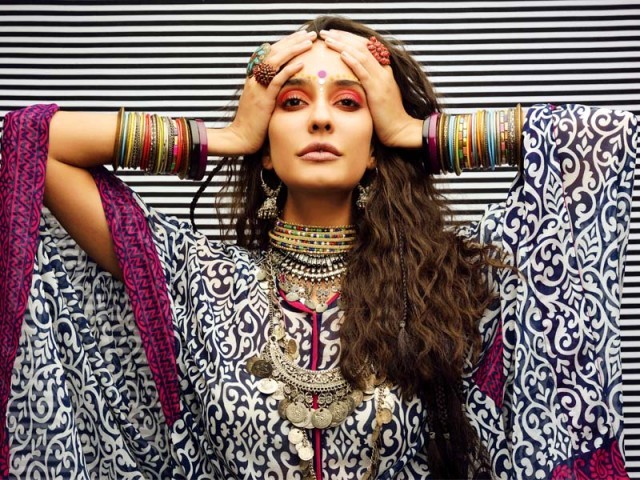 Sahar Atif re-enters the prêt market this season with a striking shoot featuring Indian model and actor Lisa Haydon. With ChenOne stores now stocking her collection, she talks to The Express Tribune about her journey as a designer and how she managed the demanding shoot.

“A great amount of time, energy and planning went into the shoot. Getting Lisa on board meant putting together a creative team that would deliver at an international level as Lisa doesn’t pose for anything short of international magazine covers,” says Atif. Describing the shoot, which was divided in three separate segments, the designer explains, “Despite the geographical challenges, with me in Pakistan, Lisa in Mumbai, and stylist Gautam Kalra and photographer Anushka Menon globetrotting, things fell into place very well.”

The shoot depicts Atif’s inspirations to the hilt, which, she says, are about freedom of expression through personal style. The collection features an effortless merging of bold backgrounds with texture, graphic prints with layering and patterns on fabrics, such as lawn and chiffon. The designer chose to experiment with the aesthetics of the shoot, but after realising that an eccentric theme won’t translate well into retail, she modified the cuts and silhouettes, according to what she thought the average Pakistani woman would wear. In doing so, the cuts did not eventually complement the prints, which on their own, were quite fascinating. The designer finds inspiration in the brand Zara, known to make high fashion clothing available at cheaper prices. Atif says, “Fashion needs to be affordable so that it can be disposable.” Her words ring true in her price range, which starts at Rs1,000 for basics, such as woven dupattas, and goes up to Rs20,000 for formal evening wear. She says, “Considering the challenges of assembling basic lawn suits, I feel prêt at these prices is a convenient solution. I do not believe in the glorified term ‘luxury prêt’. It’s either luxury or its prêt.” Exclusivity at good price points is what sells and that is what the designer hopes to cash in on with her capsule collections that favour exclusives over large volumes of the same designs. Placing ‘Sahar Atif prêt’ at ChenOne was an informed business decision on Sahar’s part. She adds, “We are not only competing with other local brands, but there is rigorous competition on the ChenOne floor too.” Matching her personality, Sahar Atif’s prêt preview was refreshing. As she puts it, “I’m not a fashionista and, in my 13-year career, I hold firm on my identity and what I want to offer to the industry.”

Atif has grown as a designer and continues to strive to reach fashion heights. She graduated from the Pakistan Institute of Fashion Design in 1998, which is when she first went into dialogue with the then ChenOne director Mian Kashif Ishfaq. “At the same time, Ena Zaman called me to set up Leisure Club, their new venture then. As fate would have it, a move to the United States paralysed all plans for me,” she says. “For a good eight years, ChenOne and I engaged in discussions, but it wasn’t until Lifestyle Pakistan in Delhi in 2012 that they took me on board to head the venture.”

The roaring success in sales along with Ali Zafar’s epic performance on the runway for a show she organised made her team immediately bag another contract, this time for Pareesa summer. “With Pareesa’s philosophy, image and production process all aligned and set, I felt it was time to try out something new,” she notes.