Under attack: Cracker bomb thrown at another Karachi school

Under attack: Cracker bomb thrown at another Karachi school 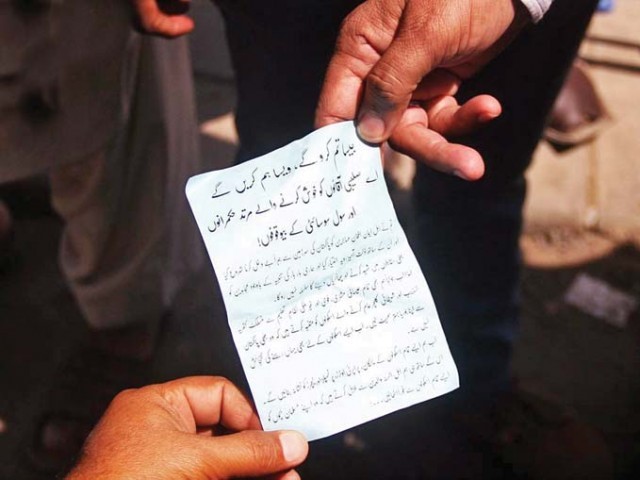 The suspects who hurled a cracker bomb outside the North Nazimabad school on Wednesday morning also left behind a letter warning the civil society of ‘dire consequences’. PHOTO: ONLINE

The students of a primary school located in North Nazimabad had just finished the morning assembly when unidentified motorcyclists threw a cracker bomb on their school on Wednesday morning. No loss of life was reported.

Panic spread in the area, a neighbourhood where several private schools are located, as parents started arriving soon after to take their children home.

For many law enforcers, who arrived minutes after the incident took place, the attack evoked a sense of déjà vu as it was strikingly similar to the grenade attack on Beaconlight school in Gulshan-e-Iqbal last month.

On Wednesday, the suspects hurled the cracker at the main wall of Beaconhouse School System’s primary branch IV and escaped. “The school administration suggested that I should take my son back home,” said Farhan Rafiq, a father. “He will obviously be going to school tomorrow as no area in Karachi can be called safe. We cannot leave the country, we are in a state of war.”

North Nazimabad SP Chaudhary Asad told The Express Tribune that a low-intensity explosive was used. He added that the attackers also left behind a threatening letter in English and Urdu, similar to the Gulshan-e-Iqbal school attack.

The letter was pasted on a wall near the schools and warned the civil society of dire consequences if extrajudicial killings and executions continued. It also warned the schools associated with ‘Western educational systems’ as well as those owned by the security forces for acting as ‘frontline advocates of apostasy and satanic culture’.

“The purpose of the attack is to stoke fear and panic among the school administrations and parents,” said SP Asad. “It looks like the men involved in both the school attacks were from the same group. We have some good leads and will be able to trace them soon.” He added that they had CCTV footage from the school, which will be used for further investigations.

An official at the school, who wished to remain anonymous, said that they had beefed up security in the area after the attack at Army Public School, Peshawar. “The parents of our students know that we have done all that we can to provide their children with a safe and secure environment inside the school premises.”

Schools located in the area, including Generations School, The City School and Falcon Grammar School, have decided to keep the schools open on Thursday (today).

According to commissioner Shoaib Siddiqui, the police and Rangers have adopted a proactive approach in providing security to schools. “The police needs to increase its surveillance and SOP even more,” he said. “Obviously some arrangements are in place that we see that the attack occurred outside the school premises and not inside.”