Barca and Rosell paid more for Neymar than the 57 millio­n euros that they declar­ed to the Spanis­h taxman.
By AFP
Published: February 13, 2015
Tweet Email 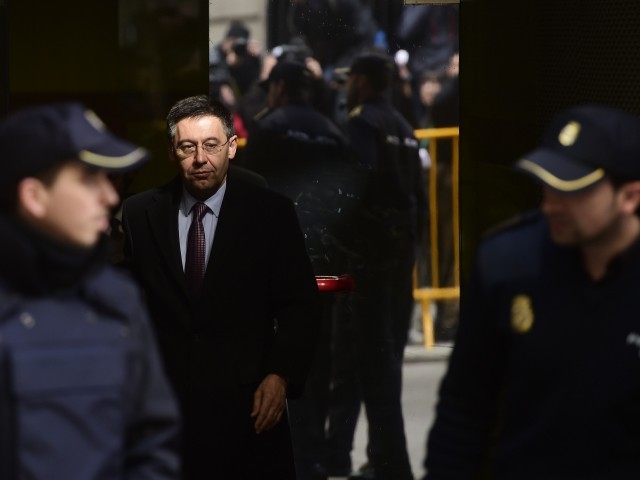 MADRID: Barcelona president Josep Bartomeu pointed the finger at his predecessor on Friday over allegations of tax fraud linked to the signing of Brazilian striker Neymar.

During three hours of questioning in a Spanish court hearing behind closed doors, Bartomeu denied any wrongdoing and said the incidents under investigation took place in 2013 when the football club was headed by Sandro Rosell, judicial sources said.

He told the Madrid court it was Rosell who negotiated and drew up Neymar’s multi-million euro contract with Barcelona, the sources added.

Rosell, who is also a suspect in the case, resigned as president over the affair just over a year ago when a complaint brought by one of the club’s members for misappropriation of funds was taken to court.

Bartomeu, who was vice-president of the Catalan club at the time, replaced Rosell as president in January 2014.

Judge Pablo Ruz at the National Court charged Bartomeu last week with tax fraud and ordered him to appear in court over alleged tax evasion worth 2.85 million euros ($3.26 million).

Spanish public prosecutors called for Bartomeu and the club as a whole to be tried on the tax fraud allegations relating to Neymar’s transfer from Brazilian club Santos in 2013.

They allege the club and Rosell paid more for Neymar than the 57 million euros that they declared to the Spanish taxman.

Prosecutors believe the figure was 82.7 million euros divided into separate contracts that secured the signing.

In his testimony before a judge on the case in July 2014, Rosell insisted that Neymar cost the club 57 million euros, 17 of which went to Santos and 40 million paid to N&N, a company owned by the player’s father.

However, following Rosell’s resignation, Barcelona also confirmed a number of extra agreements including a signing bonus for the player and scouting and collaborative agreements.

The court has raised questions over a payment made at the start of 2014 of five million euros to N&N. Prosecutors argue that the club should have paid 2.8 million euros in tax related to that payment.

During questioning on Friday, Bartomeu said that while the payment was made in 2014 while he was already president, the legal obligation stems from the contract that was signed in 2013 when Rosell was in charge.

In February of last year, the club announced that they had made a voluntary payment of 13.5 million euros to the Spanish tax authorities to settle any outstanding tax debts related to Neymar’s contract.

Barcelona said Bartomeu “gave explanations to everything he was questioned about” during his court appearance.

“He made it clear that it has never been his intention, nor that of the club’s executives, to aim to defraud the National Tax Office,” it added in a statement.

Bartomeu called a presidential club election for the end of this season due to rising pressure on his board and intends to stand as a candidate.