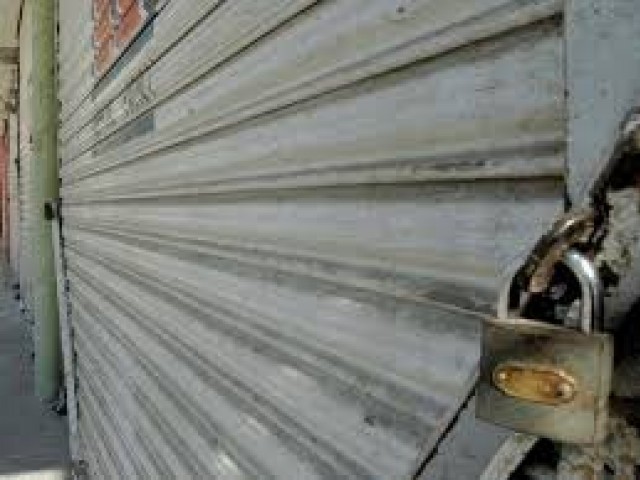 A file photo of closed shops during a strike. PHOTO: PPI

KARACHI: The Muttahida Qaumi Movement announced a day of mourning on Thursday after the body of a party worker was found in Mawach Goth on Wednesday.

According to the party, the deceased, Sohail Ahmed, was the in-charge of Society sector unit 64. He was allegedly picked up by law enforcement agencies on December 15 from the area.

Hearing the news of his death, members of the Rabita Committee started arriving at the Abbasi Shaheed Hospital, while markets in many areas of the city, including PECHS, Bahudarabad and Tariq Road, started shutting down.

“The MQM is being targeted in the name of a targeted operation,” the party chief alleged.

Further, he claimed some agencies were carrying out actions against the party on the orders of the government.

MQM leader Khawaja Izharul Hassan while announcing the day of mourning said Ahmed was shot twice, and was associated with the party for the last 26 years.

“According to the post-mortem report, he was shot twice; one bullet on the head and another on the neck,” he said.

He termed the killing a failure of both the provincial and federal government, adding that the MQM is being politically victimised.

“Over 35 of our workers have been killed extra-judicially in the current democratic regime.”

He appealed the army chief, DG Rangers and DG ISI to take notice of the extra-judicial, and ‘custodial’ killings of MQM workers.

He condoled with the MQM over the incident, assuring that no action beyond limit of law will be allowed.

Separately, five militants linked to a banned outfit were killed during a police encounter in Nawaz Goth, Karachi.

In charge Rabita Committee Qamar Mansoor in a press conference on Wednesday night said that since the Sindh Chief Minister Syed Qaim Ali Shah also holds the portfolio province’s interior minister, he is directly responsible for the extra-judicial killings of MQM workers by police and law enforcement agencies.

“Since the time PPP came in government in Sindh, they started killing our workers.”

He alleged that some police officers in plainclothes have been instructed by the government to carry out extra-judicial killings of their activists.

“The PPP has given us the message that if we protest or raise our voice, it will carry out killings of our workers.”

He appealed to traders and transporters to support their call for a strike.

The MQM leader warned that if any other worker became victim of an extra-judicial killing then the appeals to their workers to remain patient would go unheeded.