Food festiv­al that brings togeth­er the taste of the city is being held second year in a row
By Yusra Salim / Photo: Athar Khan
Published: January 24, 2015
Tweet Email 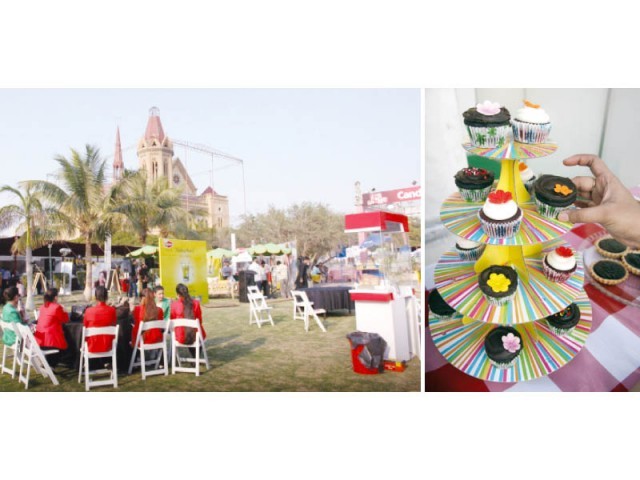 Food festival that brings together the taste of the city is being held second year in a row. PHOTO: ATHAR KHAN/EXPRESS

If there is one thing that shows the diversity of Karachi, it is the food this city offers. This weekend, you can find everything from chappli kebabs and paratha rolls to churros and ravioli at the Karachi Eat Festival at Frere Hall.

The three-day festival that started on Friday evening is offering food stalls by the city’s own restaurants. There will be face painting, shirt printing and photo booths as well. “We’re giving people some spice to their photographs that is why we have two photo booths,” said Cyra Anklesaria, one of the organisers. The festival opens at 11am today and tomorrow and will continue till 11pm on both days.

A radio station, FM91, has set up a colourful rickshaw to serve as a photo prop and let people capture these moments, said its station manager Shahab Hashmi. “We want people to enjoy the feel of the food in the pictures that is why we designed the Frere Hall building for the background and made props of food,” explained Mutahir Mahmood of O’ Shoot Photography.

A volunteer said that when you enter the festival, be sure to look for a stall named ‘Karachi Taste’ where you will be able to get some guidance about the various stalls and get a chance to taste some of the food.

There will be more than 10 stalls of baked goods and the organisers are also planning a cake competition among the participants, every day after sunset. “The Karachi fudge company is giving you the opportunity to taste six different flavours of chocolate at their stall,” said the owner of the home-based company, Rasti Ahmed. “The best flavour is ‘chilli chocolate’, which I learnt to make in one year.”

The owner of Danish open sandwiches, Ruheena Malik said their sandwiches are made of organic bread. “Most people in Karachi like spicy kebabs and barbeque but there are some people who love light food and we are here for them,” she said.

The festival is offering foodies live music as well. A musical band, named ‘Lennys’, will be performing every day after sunset till 11pm. “Other people are also free to perform. If they want to sing a song, the stage is free for them,” said Omar Omari, one of the organisers.

What to look out for:

Corn dogs, hot chocolate and churros at Pane and Amore

Homemade ravioli at The Deli

For the love of literature: KLF to bring Nehru’s niece this year