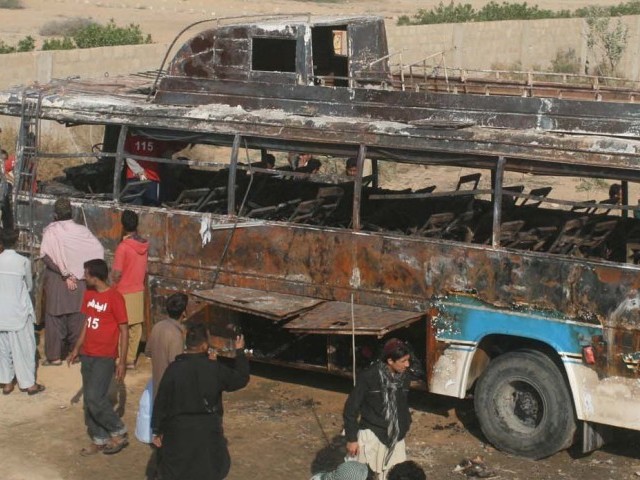 As the bodies were charred beyond recognition, the authorities had decided to conduct DNA tests to identify the victims before handing the bodies over to the heirs. PHOTO: INP

KARACHI: A team of the National Forensic Science Agency of the National Police Bureau has collected the samples of the victims of the tragic accident on Kathore Link Road and their heirs for the DNA identification process.

At least 62 people were burned alive on the Shikarpur-bound Geo al-Shoaib Coach that had started its journey from Karachi. The overcrowded bus caught fire following a collision with a tanker at around midnight on January 11. As the bodies were charred beyond recognition, the authorities had decided to conduct DNA tests to identify the victims before handing the bodies over to the heirs.

The police investigators had later decided to summon the experts from the facility in Islamabad to collect the samples in Karachi, instead of sending them to the laboratory.

The team arrived in Karachi on Monday, after which the police approached the victims’ heirs again for the collection of blood samples. The DNA experts accepted the samples from the remains of the victims collected by the doctors at the hospital, but the blood samples of the relatives were not accepted as most belonged to distant relatives.

The officer said that the jail authorities have been asked to collect his sample. He added that the experts have assured the police that they will submit the DNA test reports within two weeks.

Shrug it off: The orphaned link roads