Lawyer claime­d CM’s petiti­on before SHC is not mainta­inable, he should have gone to the tribun­al.
By Our Correspondent
Published: January 9, 2015
Tweet Email 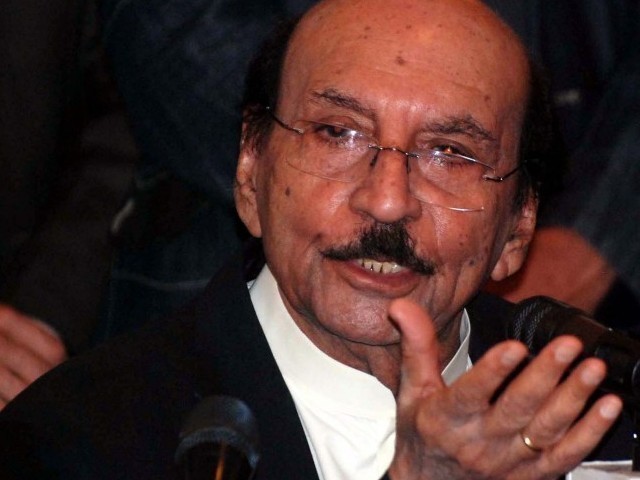 Advocate Bhutta pointed out that, under article 225 of the Constitution, the chief minister cannot challenge the plea in high court and has to go before the election tribunal. Therefore, he argued, the CM’s petition before the SHC is not maintainable for hearing. PHOTO: PPI

KARACHI: The Sindh High Court (SHC) restrained on Thursday the election tribunal at Karachi from passing any final order on a plea challenging the poll results on the chief minister’s seat.

A division bench, comprising justices Muhammad Ali Mazhar and Shahab Sarki, issued a restraining order to the tribunal, where Pakistan Muslim League-Nawaz’s Ghous Ali Shah had gone for inquiry into the alleged rigging in the 2013 general elections. Sindh Chief Minister Qaim Ali Shah had won the elections on the provincial assembly seat from Khairpur district, PS-29.

Advocate Farooq H Naek said his client, now the chief minister of province, had filed an application under Section 58 of the Representation of Peoples Act 1976 before the Election Commission of Pakistan seeking a transfer of proceedings from election tribunal in Karachi to any other tribunal in the province as he claimed the tribunal’s head was biased against him.

The election commission’s bench, comprising its chairperson Justice Sardar Muhammad Raza and three other members took up the matter on December 12 last year and called for comments from the election tribunal immediately through fax and barred it from passing any final order until December 15. On December 18, a bench headed by the chief election commissioner passed an order dismissing the plea.

Naek argued that the commissioner has powers to transfer the election petition from one tribunal to another. The tribunal to which the petition is transferred shall proceed with the trial from the stage from which it was transferred. And may, if it thinks fit, recall and examine any of the witnesses already examined, he added.

Advocate Muhammad Aslam Bhutta filed the comments on behalf of the respondent, Ghous Ali Shah, and also supplied a copy to the petitioner’s lawyer.

Advocate Bhutta pointed out that, under article 225 of the Constitution, the chief minister cannot challenge the plea in high court and has to go before the election tribunal. Therefore, he argued, the CM’s petition before the SHC is not maintainable for hearing. “At the present, we are dealing with the petition in which the order of the ECP is impugned … the issue is whether or not the transfer application could be heard and decided alone by the learned Chief Election Commissioner of Pakistan after passing the interim order by the commission,” the judges remarked.

Farooq Naek referred to the judgment passed by the Supreme Court in Imran Khan’s case against the ECP and the bench observed the points need consideration. All the lawyers agreed that, since the SHC bench has heard the arguments, therefore, this petition can be heard next week and disposed of at the Katcha Peshi stage.