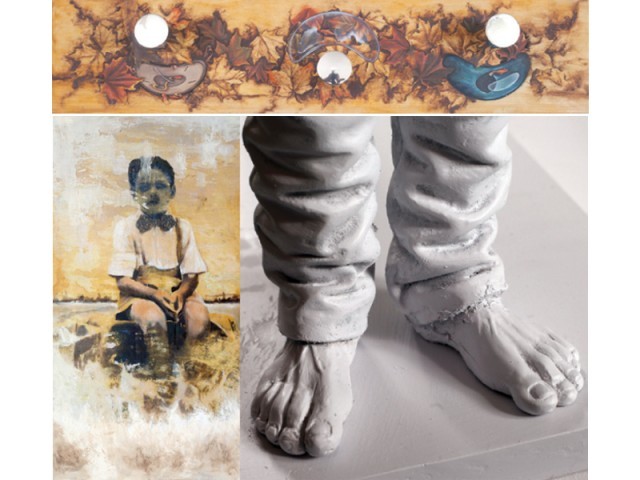 Seven artists from different cities stayed at an apartment for about a month, working on artwork for Sanat’s second residency programme. PHOTO: COURTESY SANAT GALLERY

KARACHI: Good news for all food lovers: Sanat gallery now has a café on its ground floor.

‘Fika’ was launched on Friday alongside the opening of the show curated by visual artist Muhammad Zeeshan. “We should have more spaces like studios where artists can work together,” he said, appreciating Sanat’s residency initiatives.

Seven artists belonging to different cities of Pakistan participated in Sanat’s second residency programme. They stayed at an apartment for about a month and worked with different methods.

Naveed Siddiqui worked with a technique seldom found in the artworks of Karachi. Belonging to the city of lights, Siddiqui worked with anamorphosis. This is an artistic practice that makes a deliberate attempt at distorting images in a way that the viewer requires an added device, such as a mirror, to reconstitute them. The young artist employed mirrors to serve his purpose and said that he likes to take up challenges in his work.

“Doing it directly is easy,” he said. “I like to do it differently, in a complicated way. The mirrors offer reflection. At times, we don’t understand many things. Reflection allows you think.”

Two young artists, Hussain Jamil and Mamoona Riaz, have been greatly inspired by Karachi but in different ways. While Jamil, who hails from Abbotabad, is fascinated by the advertisements on the walls of Karachi, Islamabad-based Riaz compares the city of lights to her ‘dead city’.

In one of his works titled ‘Ghar Ghar ki Kahani’, Jamil has drawn a building on which it is written ‘yahan par likhna mana hai [No writing allowed here]’. In spite of the instructions, ads such as ‘man-pasand shaadi [freewill marriage]’ and ‘Asad Bangali’ are chalked right there. “This was the first time I came to Karachi and I found this very funny,” said the artist.

Riaz, however, has a different perspective on Karachi. Using maps of the city, she created a series depicting gears, vaults and a central focal point. In all three panels of the series, the centre had an image of the sea.

“I come from a dead city,” she said. “This city keeps moving. Everything keeps changing but the sea has always been there.”

Another artist, Naira Mushtaq, expressed her fear of stuffed toys through her works. She painted images that looked like old photographs that tend to get blurry with the passage of time. “I used dolls in my works as I didn’t like dolls at all and I still don’t,” she said. “Stuffed toys just scare me. These works are an attempt at diminishing the overwhelming sense of nostalgia.”

Coming over to Saud Baloch’s works, one would realise that not all art is about beauty. Baloch, who belongs to Quetta, used sculpture to comment on the forms of torture prevalent in our society. The red gunny bags that seemed to be soaked in blood were a harsh reminder of the ‘bori’ culture. The viewer is greatly affected by the intensity of the colour as well as the theme.

Moreover, the white sombre sculptures of men with their heads covered appeared to be a comment on the alleged enforced disappearances of people belonging to interior Sindh and Balochistan. The whole sculptures were sheer white which created a sense of lifelessness and a discomforting complacency.

The exhibition is set to run till December 19.