Designers warm up to menswear

Designers warm up to menswear 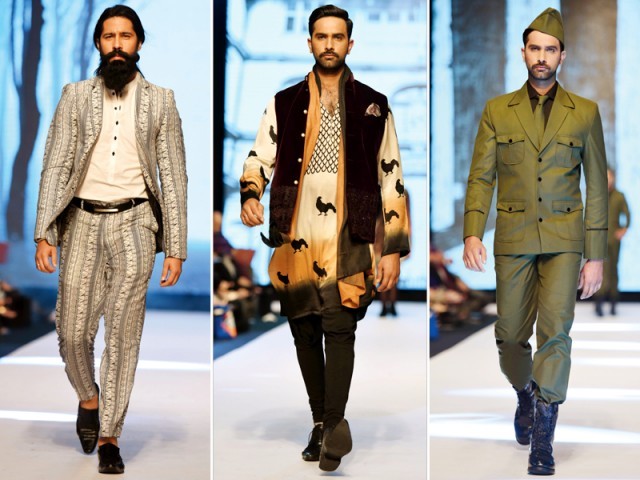 Deepak Perwani, Emraan Rajput and Deepak n Fahad were among those who showcased their men’s collections at FPW 2014. PHOTO COURTESY: TAPU JAVERI

In the fashion industry, intrinsically known to be dominated by women, menswear is often known to take the back seat. But this trend seems to be changing, as Pakistani designers further their exploration of the largely underutilised realm of men’s fashion. The recently-held Fashion Pakistan Week (FPW) is a case in point, which saw a host of designers showcasing their menswear collections. The Express Tribune talks to fashion fraternity frontmen to take a look at the evolution of menswear and the Pakistani metrosexual man.

“Men had never been so picky earlier,” says designer Ishtiaq Afzal Khan, whose ‘Aurora’ collection at FPW featured both menswear and womenswear. “Previously, what was shown in fashion shows was not considered as optimal for regular wear. But the fashion industry has grown so much and mixes new concepts and local trends so well that people have begun to consider them,” he adds. Khan also credits the increase in fashion design education with this change in men’s perception towards fashion.

“We take great pride in the fact that our menswear outfits sell like hot cakes, but we still love designing for women,” says designer Fahad Yaqoob of Deepak n Fahad, the label showcased their ‘Siyah-Sufaid’ collection at FPW. “We will sell pieces from the ramp. Plus, there will be pieces with limited embroidery and prints for men who don’t like to dress up too loud,” he states.

Deepak Perwani, who dedicated his FPW collection to men, titling it ‘Everything But the Girl’, holds, “Today’s man is fashion-savvy. He knows what he wants, travels and is in touch with global fashion trends.” Khan feels that the man of today has developed an eye for fashion and is bold enough to diverge from traditional ways of dressing up. “A huge ratio of men has become fashion-savvy and incorporates fashionable choices into their daily lives,” he comments.

Yaqoob states, “Today’s man is not only smart and educated but also comes up with innovative ideas of his own. We get clients who are in sync with prevailing trends and also know how to carry themselves. He adds, “Men have become more aware of their surroundings. Not only do they dress in accordance with the occasion but also have a great sense of colour coordination and accessorising.”

Designer Emraan Rajput, whose army-inspired ‘Alpha’ collection commanded attention, considers this growing penchant for men’s fashion as the need of the hour. “Nowadays, corporate culture demands men to dress up properly, and how one dresses can accentuate one’s personality. The new generation wants to look fashionable and pays attention to detail,” he comments.

Perwani comments on how men in different cities bear in mind multiple factors while dressing up. “Men in Karachi, as opposed to those in Lahore and Islamabad, dress up, depending on the events they have to attend and the weather, as thick fabrics, such as wool, leather and velvet sell more in Lahore in comparison with Karachi.”

Stating if this growing interest in menswear will dash down or is here to stay, Khan says, “It’s at its peak, with designer collaborations and the entertainment industry making men even more aware of fashion. When people see trends of different countries, they adopt what they like. This habit is gradually leading to men becoming more wary of their fashion choices.” Yaqoob agrees, saying, “Fashion is everywhere. It is dominant in the movies, music and social media. It is on the streets, at work and in malls. It is going to grow and will stay for the eons to come.”