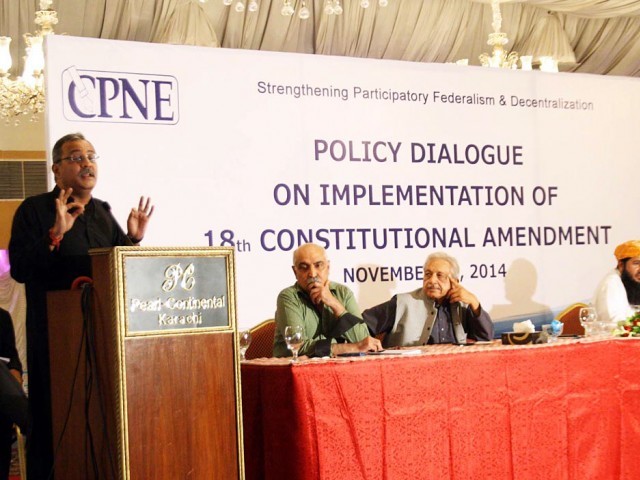 According to Senator Raza Rabbani, politicians are far more mature today, which is why all political parties are on the same page against the Pakistan Tehreek-e-Insaf’s (PTI) sit-in – not in support of the government but in favour of the democratic and constitutional system.

“After the 18th Amendment, there is no shortcut left to lead to the derailment of the system,” he said.

Speaking at the concluding session on the third day of a media training course organised by the Council of Pakistan Newspaper Editors (CPNE) and the United Nations Development Program (UNDP) at the Pearl Continental hotel, Rabbani was briefing the participants about the 18th Amendment to the Constitution of Pakistan.

The session was titled ‘Policy Dialogue on Implementation of 18th Constitutional Amendment’. Rabbani shed light on the unconstitutional activities undertaken by both the central and provincial governments. “Under which law has Khursheed Shah written a letter to the PM about the federal charter on health and according to which law has the PM accepted his letter?” he questioned. “This is unconstitutional how the PM is accepting it.”

Speaking at the event, Barrister Zamir Ghumro explained the background of constitutional practice in the subcontinent. “The background of the 18th Amendment is the charter of democracy that was signed between the Pakistan Muslim League – Nawaz and the Pakistan Peoples Party.”

While Muttahida Qaumi Movement leader Syed Haider Abbas Rizvi was optimistic about the consequences of the 18th Amendment, he expressed reservations over the charter of democracy. “We had to accept the 18th Amendment while the basis of it was signed only between two political parties of Pakistan,” he said.

Jamiat Ulema-e-Islam (JUI) Sindh general secretary Khalid Soomro said that if the central government gives more powers to the provinces, it will only strengthen the federation. “The federal government will be respected.”

Concluding the session, CPNE president Mujeebur Rehman Shami said that the democratic forces of Pakistan are facing challenges by the undemocratic forces. “Our constitution grants laws under which sovereignty of the provinces must be maintained,” he said. “New provinces can also be made on administrative basis.”