E-Urdu: How one man’s plea for Nastaleeq was heard by Apple

E-Urdu: How one man’s plea for Nastaleeq was heard by Apple 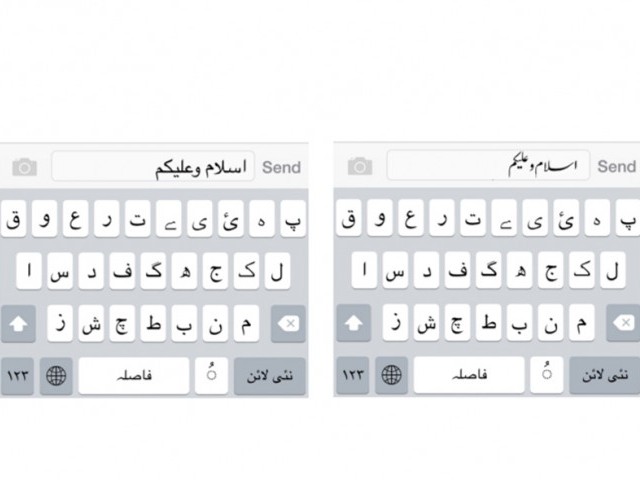 Mudassir Azeemi says implementing Nastaleeq on the iOS will not be as difficult as it seems. PHOTO: MUDASSIR AZEEMI

KARACHI: Apple implemented the Urdu language keyboard across mobile devices in its iOS 8 update in mid-September. But persistence of a few Urdu speakers has now forced the IT giant to consider adopting the native typeface of Urdu language, Nastaleeq, along with the current Naskh font.

The Cupertino-based company had launched iOS 8 on September 17 in what was termed their biggest software update to date, boasting a whole host of features for those using modern Apple mobile devices. Hidden among those upgrades was the implementation of the Urdu keyboard across the system. This enables users of Apple’s popular iPhone, iTouch and iPad devices to type in Urdu while using texts, email, social media and other interaction. This functionality was previously available only through language-specific apps such as Urdu Writer.

The downside for some in this new feature, though, is that it follows the Naskh typeface derived from Arabic Unicode, rather than Nastaleeq. This prompted the creator of Urdu Writer, Mudassir Azeemi, to start a social media campaign. In writing a letter, emailing and tweeting to the CEO of Apple CEO, Tim Cook, Azeemi urged, explained, even pleaded about how easy it would be to implement the Nastaleeq typeface for the Urdu keyboard in iOS 8.

The effort paid part dividend when on October 13, Azeemi got a phone call from Cook’s representatives. Azeemi was initially fretting whether there are lawyers on the other end with a cease and desist notice over his campaign. Instead, the representative assured him that Apple will consider implementing the typeface.

.@tim_cook thank you so very much for a call that I receive on your behalf regarding #NastaleeqItApple issue! You are awesome!

Azeemi, a Pakistani who works out of San Francisco, says the roots of his campaign germinated well before his email to Cook on October 5, and subsequent snail-mail on October 8.

“When my daughter was growing up, I saw that she was learning alphabet through YouTube,” the app and user experience designer tells The Express Tribune. Hoping that his child could use technology to learn about her heritage and the Urdu language, Azeemi started work on building an app about Urdu.

“We started wondering if we can implement it on iOS. We then designed an entire keyboard for Urdu Writer in 2010.”

Urdu Writer met with great success as it allowed people to type in Urdu and share their writing through email, SMS, Facebook and Twitter. Most importantly, Urdu Writer allowed users to access the Nastaleeq font.

Nastaleeq is a Perso-Arabic script. It is the preferred writing script for Persian Kashmiri and Punjabi – languages which contributed in the creation of Urdu.

“We asked around and a lot of people said that they could not read Naskh,” Azeemi says before explaining that readability of Urdu is better in Nastaleeq rather than in other members of the font family, including the widely implemented Naskh, or the lesser used Kufic font.

This was echoed by Ahsan Saeed, who divides time as an Urdu localisation moderator for Twitter and his day job at a digital agency. “People used to tell me that Twitter should have the Nastaleeq font.”

“I raised it [implementing Nastaleeq on Twitter] with my community manager, who is an Iranian and familiar with the Nastaleeq font, and he agreed to forward the query to the engineers.”

One of the reasons why Urdu keyboard has been adopted so late and why Nastaleeq does not feature on any major social media platform or technology company’s radar, is the low usage of the language online. The other reason is the technological barrier in its adoption owing to lack of support for the font by operating systems and devices.

Twitter, which introduced Urdu as a language on its site in 2012, opted against implementing Nastaleeq, owing to low usage of the language and lack of support by operating systems on one its main platforms – mobile devices.

“Urdu tweet tradition has grown in the past two years [when the language was implemented on Twitter],” says Saeed, but concedes it has remained slow.

“Slow adoption,” he explains, is because social media is new as well. “Users have to first understand what the platform is and then move to use it in Urdu.”

“We have to keep reminding users about the use of Urdu,” says Saeed.

But Azeemi points out that there is no lack of Urdu users. His app Urdu Writer – which will not receive an iOS 8 makeover – was downloaded over 165,000 times all over the world, primarily in the UK, US and Middle East. “If the Urdu keyboard (in Naskh) has been enabled system-wide on iOS, it means it must have spiked on their [Apple’s] radar.”

“If Hebrew can be incorporated in the keyboard with few users, why not Nastaleeq when there are so many users across the world?”

A case of not how many, but who

The lack of support for Urdu by tech giants such as Apple, Google and Microsoft has been the main stumbling block for spread of the language, and Nastaleeq’s users have had to rely on third party solutions such as InPage.

“Apple has only now implemented the Urdu-Naskh keyboard, but Android OS, which has far more users especially in countries like Pakistan, has not. Individual device manufacturers may have implemented a Naskh based keyboard, but not Android,” laments Saeed who worked to translate the keyboard on Twitter for mobile, but never got a green light for the Android app owing to little support by the OS.

This is one of the reasons why Azeemi, a graduate of Karachi University, says the first step in greater adoption of Nastaleeq must involve targeting giants like Apple who build their own unicode for fonts. With iOS now on board, the hope is that the remaining technology companies including Google and Microsoft would follow suit in not only implementing the Urdu keyboard across their systems, but eventually the Nastaleeq font as well.