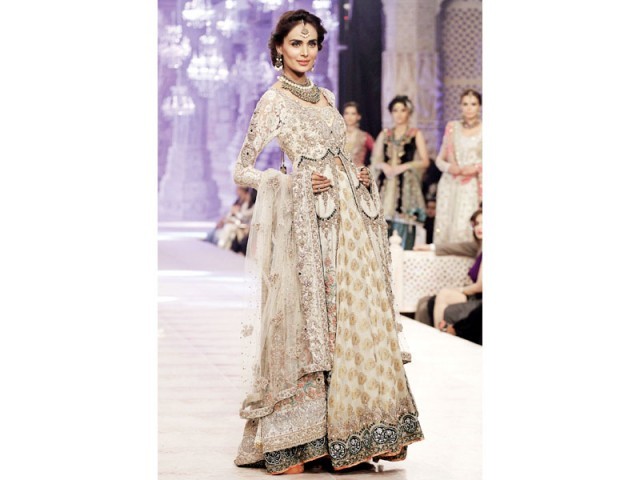 LAHORE: The #roadtoPLBW leads to fruition. The third day of the PDFC L’Oréal Paris Bridal Week (PLBW) 2014 ended on a high note. With one beautiful collection after the other, the day was an absolute delight to sit through. However, the House of Kamiar Rokni and Élan’s collections were missed on the ramp this year.

There is no doubt that when it comes to bridal fashion, these design houses are two of the most sought-after couturiers in Punjab. From Nomi Ansari’s vibrant colours to Sana Safinaz’s bohemian aesthetics, it was hard to choose which collection dominated the runway. The ‘Gul’ collection was a fairytale on the ramp. Using a myriad of colours and cuts, Ansari is one designer who doesn’t hesitate to experiment. What sets him apart is his keen eye for the right shades, which he contrasts with finesse. Be it pairing night colours with bright pastels or neons, one can count on him for showcasing a stand-out colour palette. Showcasing printed saris with sheer net, embroidered and sequined pallus, he moved away from his usual aesthetic of using warmer colour tones and experimented with neons and pastels this season. The designer has been the pioneer of gaara embroidery with sequins on sheer nets at PLBW, which has become one of the biggest trends of the year. She stuck to her signature aesthetic and presented yet another beautiful collection with a new cut, the kimono kaftan, a trend that will be a sure-fire winner in the upcoming season. Not only was the evening-wear kimono kaftan simple but also flattering. Comprising a diverse colour palette, the pieces were embellished using a variety of techniques, such as appliqué, cutwork and floral thread work. From velvet blouses to two-way saris, it was refreshing to see Lakhani push the boundaries with her draperies. Kiran Aman provided eclectic gold jewellery pieces for the collection, which complemented the entire look. ‘The Ghalib Collection’, which drew inspiration from the poetry of Mirza Ghalib, was truly poetic. Practical and wearable, the line will have great retail value. Azwer took the hemlines skyward with cropped jackets and short shirts over farshi lehengas and cropped trousers. This ethereal collection showcased a lot of white with white embroidery and zardozi work along with cutwork and her signature shawls. We wish that Azwer had played around a little more with her cuts since the lehenga and jacket look became a tad monotonous on the runway. From angarkhas to pastel shades, Azwer translated the old school charm while keeping her modern aesthetic alive in her collection, a balance that not many can grasp. The collection also featured simple kurtas for men paired with shikargah shawls. The designers chose a Sindhi bohemian aesthetic for their collection, pushing the boundaries of their brand once again. The moment one thinks the design house might become stagnant with its usual pretty formals and bridals, they up the ante and put up an even better collection, reinforcing the fact that they remain among the biggest fashion powerhouses in the country. The design house merged its pret wear silk prints with formal couture. From chunri and rilli embroidery to larger expansive motifs, the collection was nothing like what we have seen from Sana Safinaz before, yet they managed to stay true to their design aesthetic and philosophy. The collection predominantly showcased warmer colour tones and rich fabric, spelling out that this winter, metallics and velvet will be all the rage. The designer duo’s collection titled ‘Rumi to Raj’ was reflective of their years of experience, redefined with a new aesthetic. From metallic tissue saris to saris with jackets, their collection featured saris, lehenga cholis and shalwar kameez, all paired with intricately designed velvet shawls. With a colour palette consisting of hues of beige and nude, accentuated with vibrant hues, the collection was reminiscent of the grandeur of the Mughal era. Internationally, palazzo pants are making a comeback and it was great to see Nickie Nina in tune with a global trend, incorporating it into their own design aesthetics.