The sands of time: New books capture the rich history that Sindh is gradually losing

The sands of time: New books capture the rich history that Sindh is gradually losing 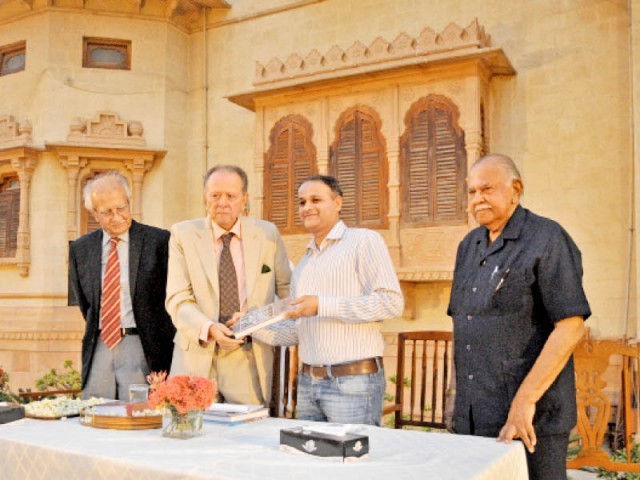 Sindh has a rich regional history going back to 5,000 years and we should feel proud that we have brought Moen jo Daro on the world map, said former culture minister Hafeez Pirzada.

“Reading and writing about your cultural background is an experience that redefines you,” he said, addressing the audience at a book launch at Mohatta Palace Museum on Friday. The museum was the perfect venue to welcome new members to the ranks of books about Sindh’s history in an event organised by the Endowment Fund Trust (EFT). “Art and Architecture of Sindh”, written by Pakistan Institute of Development Economics research anthropologist Zulfiqar Ali Kalhoro, was the first of the day’s additions to literature on the vanishing history of Sindh’s architecture.

“This book is a journey of the cultural views of Sindh to places that have never been discussed in previous books about the region’s history,” said Kalhoro. “It captures aspects from folklore to music and dance, from art and culture to the Talpurs and the Burfats.”

The collection of detailed articles on the monuments, temples and tombs of Sindh is the culmination of a decade of work by the author. “Some of the monuments and sites I have discussed, which were an integral part of our rich history, were swept away by the floods in 2010,” Kalhoro told The Express Tribune.

A reprint of one of the oldest histories of Sindh was also presented at the event. Compiled 400 years ago in Persian by Munshi Mir Masum Shah of Bakhar, ‘Tarikh-e-Masumi’ is the oldest manuscript about the era of the Arghuns and the Tarkhans in Sindh after “Chachnama”. Initially edited by Dr Umar bin Muhammad Daudpota in 1938, an English translation of the book by Dr Mehmoodul Hasan Siddiqui was launched on Friday.

Talking about Sindh’s love for history, Pirzada said that it was the only province that had a proper department of culture and heritage at the time of independence. “The past is written and rewritten, but we should keep trying to show fresh perspectives of it to our youth,” he told The Express Tribune.

“The debate on culture, the battle for dignity and self-respect, is fought everywhere, but the real picture lies in the hearts of the people of Sindh,” said EFT secretary Abdul Hamid Akhund, a publishing partner for the books.

Taking pains: Ibrahim Joyo’s ‘Save Sindh, Save the Continent’ translated into Sindhi