A protest against Israeli attacks on Gaza entered its second week as hundreds of protesters and human rights activists staged another demonstration at the Liberty Roundabout on Wednesday.


The protesters chanted slogans against Israeli atrocities in the besieged Gaza Strip.

“The Israeli attacks are the worst form of state-terrorism. More than 80 per cent of the people killed in the Israeli raids are civilians. The Jewish state is intentionally making women and children their targets. I strongly condemn Israeli actions and request my countrymen to do the same,” she said. Khawaja said that all Pakistanis should extend moral support to the Palestinians.

“Pakistan itself faces many problems, but this should not stop us from raising our voice to support a just cause. Our own problems should not make us insensitive towards the problems of other human beings,” said Khawaja.

Khan said worldwide protests had forced an emergency session of the UN Human Rights Council and Israel was under diplomatic pressure to end the offensive.

“However, unconditional support from the United States has enabled Israel to continue to murder innocents in Gaza. In such a situation, international legal restraints are not the best way of saving Gaza,” she said. Asma Naqvi, another protester, said that people from all countries should support Gaza residents.

“You do not need to be a Muslim to stand up for Gaza. You just need to be a human. Innocent people are being killed by Israeli forces for no reason. We need to stand up against those stone-hearted people. That is why we come and protest here at the Liberty Roundabout daily,” she said.

International Association of Human Rights Chairperson Rubab Mehdi H Rizvi said, “We all have a responsibility to promote peace and justice. Justice comes only when violence has stopped.”

Rizvi said everybody lost in a war. “This is not a time to go into our separate corners. Nobody can strengthen peace if they choose a side,” she said. “Now is the time to come together towards an understanding. We should not fan the flames of war, which are already high. We need neither Anti-Semitism nor Islamophobia,” she said.

“Firing rockets may be emotionally satisfying for Hamas, but this undermines the Palestinian cause. Equally, Israeli bombing of civilians and killing children is not an act of self-defence but a war crime,” said Rizvi.

She said that the supporters of peace from all sides needed to come together to ensure that the conflict came to an end. “The United Nations and International Criminal Court can and should play a role in deterring further war crimes,” Rizvi said. 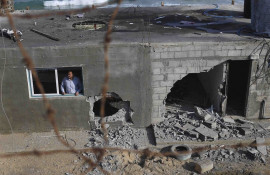 Leaders of Muslim Ummah should contact Mr Satish Cjandra without any further delay .

(July 20, 2014) CAN TAMIL BE COMPARED TO SANSKRIT? Tamilian Jayalalitha objects to observing a Sanskrit week and demands a “classical languages week” putting Tamil at the same level as Sanskrit. Sanskrit mantras can command the forces of nature; anyone can see videos of thousands of practitioners of Transcendental Meditation spectacularly overcoming gravity every day and this is a trivial example of the power of Sanskrit. Can Tamil do that? No language can be compared to Dev Bhasha Sanskrit. I was aghast to see on Bharat-Rakshak -- a collection of bhangis and chamars -- someone say Jews are the Brahmins of the Middle East, defiling the word ‘Brahmin’ and defiling India. Any Indian, no matter what his caste, is higher than a Westerner who by definition are ‘mlecchas’ and the lowliest worm is higher than a Jew. To restore social order, Jews and Americans must be denied entry to India just as they would be denied entry to a temple.

(July 17, 2014) MALAYSIAN AIRLINER THAT CRASHED IN UKRAINE WAS BROUGHT DOWN BY MICROWAVE SIGNALS FROM UNITED STATES NATIONAL SECURITY AGENCY SATELLITES. See ‘Indian Air Force Pilots’ Murder’ : IndianAirForcePilotsMurderDOTblogspotDOTcom . This was done to keep the conflict alive and keep the former republics from reuniting as I had suggested below :-

Russia and Ukraine are a single country temporarily separated by the machinations of the CIA. They should forget everything and re-unite with the help of other republics that were part of the same country, with no role for the EU or the UN. A body of representatives of the former republics including Russia and Ukraine should by consensus make all decisions which everyone has to abide by. The separate republics are the result of a voluntary dissolution of a utopian state because of its leaders’ willingness to experiment. By now it is clear that the republics should re-integrate.

Ukrainians should at least suspend their strife till after the destruction of the United States. Indians are going crazy that, in response to my reference to Modi fighting for a U.S. visa, the United States wants to “honor” Modi by having him address a joint session of U.S. Congress. They are silent about the honor given to the greatest Indian of all time:- ""India's greatest scientist and greatest living Indian publicly tortured in Harvard seminar, systematically and totally starved for up to 3 weeks at a time, made semi-starved and homeless and even blind for years, kept under 24-hour audio and video surveillance as well as surveillance of [and interference with] communications and electrical typewriter and computer use, document creation and photocopying, etc., by satellite for more than past 3 decades, systematically harassed and in poverty and neutralised and robbed of his work at the cost of hundreds of millions of dollars per year, robbed of crores in his money and property in India by C.I.A.-RAW, forced back into exile in the U.S., all with full cooperation and participation of India's RAW and India's C.I.A.-RAW-controlled prime ministers, politicians and media -- to keep India poor, weak and enslaved" and how this means the nuclear destruction of New Delhi and then the coast-to-coast destruction of the U.S.; see my blog titled 'Nuclear Supremacy For India Over U.S.' which can be found by a Yahoo/Google search with the title; my biography can be found in Marquis' Who's Who in the World, 2014 and earlier editions." In the past few years I have had India's nuclear forces emplace India's nuclear warheads in Washington, New York and other U.S. cities, ready to be exploded. Simultaneously destroying Washington, New York and New Delhi (RAW headquarters, South Block and North Block) with a warning that additional U.S. cities will be similarly destroyed, with nuclear warheads already emplaced in them, if there is any retaliation or sign of retaliation, will immediately make India the supreme military and economic power in the world even before implementing my proposal about money which can make India’s economy grow 30% per year or more. IndiasLegitimateRulerSatishChandraDOTblogspotDOTcom

FORGET PALESTINIANS, NO ONE HAS DONE MORE DAMAGE TO INDIA THAN THE JEWS. CUT OUT SUSHMA SWARAJ’S UGLY TWAT AND THROW HER ON A DUNG HEAP.

I have said no one has done more damage to India, in science and in everything else, than the Jews. See ‘This Is What the Jews, Americans and RAW Have Been Doing’ : ThisIsWhatTheJewsHaveBeenDoingDOTblogspotDOTcom . In a letter dated July 27, 1982 to Indira Gandhi as prime minister I referred to an act, by American Jews, that was “the equivalent of an annihilatory nuclear first strike on India”. In her reply dated July 29, 1982 she wrote “Dear Mr. Chandra, I have received your letter dated July 27, 1982 and am passing it on to my Principal Secretary to deal with it. Sincerely, Indira Gandhi”. In December, 1982 I wrote to her “There was sudden, terminal, overwhelming violence against me during a seminar at Harvard University and rather similar occurrences earlier… India can expect sudden, annihilatory violence … with nuclear weapons … against its population … unless it can mount a decisively superior force to stop it”. Following my advice, India’s strategic program, including the Integrated Guided Missile Development Programme and the Centre for Advanced Technology, was started to give India victory in a nuclear war with the United States and because of my influence on her, Indira Gandhi as prime minister was assassinated by CIA-RAW and later when Rajiv Gandhi realized the truth of what I had written to her after the American invasion of Iraq which was the first Gulf War, he was also assassinated by CIA-RAW. In the past few years, I have had India’s nuclear forces emplace nuclear warheads in Washington, New York and other U.S. cities and India is now in a position to destroy the United States without being destroyed. In fact, India is in a position now to destroy the United States without itself suffering a single casualty by triggering its nuclear warheads emplaced in Washington and New York with a warning that additional U.S. cities will be similarly destroyed if there is any retaliation or sign of retaliation. Goonda Modi and his Cabinet are determined to keep India in slavery.

For the past 37 years, the U.S. National Security Agency has kept me under 24-hour audio, video and communications surveillance by satellite and feeds of this surveillance are provided to India's RAW as well as to Russian intelligence. When he was president, Bill Clinton held a White House conference on "The New Economy" which results from my proposal about money described in "How India's Economy Can Grow 30% Per Year Or More" : HowIndiasEconomyCanGrowDOTblogsourDOTcom . The CIA has been stealing my intellectually property for the past 37 years while inflicting as much injury and degradation on me as possible with the fullest participation of just about everyone who is anyone in the American government, media, academia, etc.; this is one reason why the United States has to be destroyed by India's nuclear forces.