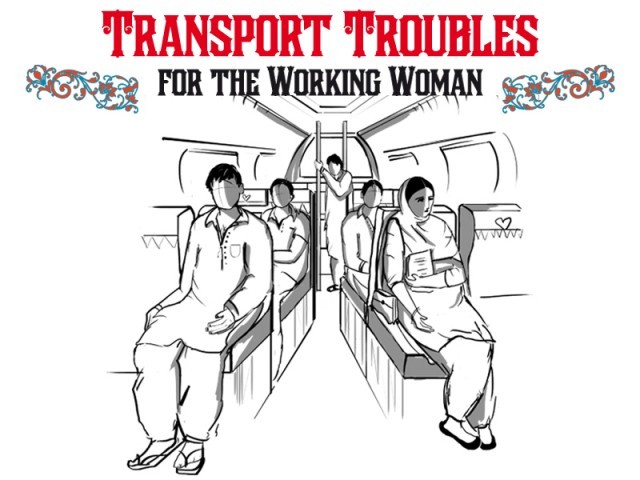 Over the past few years, several issues have been raised with regard to the transport mechanisms available in Pakistan and whether or not they are safe for use by the women in the country. When it comes to public transport, the knee-jerk reaction is that it should provide an easy form of conveyance for people across the world, regardless of their gender or location. At the other end of the spectrum, however, lies a ruthless and often brutal side to public transport that reinforces misogyny and its ensuing consequences

In general, our society regards transport as a seemingly banal issue that does not warrant enough attention: the rich are comfortable within their air-conditioned cars and the poor lack the resources to bring about a change, even if they wanted to. But of late, incidents like that of the 23-year-old Delhi-based physiotherapy student who was gang raped on her bus ride home from school in late 2012 have shocked the collective conscience of society. It, therefore, comes as no surprise that the International Labour Organisation (ILO) repeatedly highlights the need for safe transportation for women, claiming that the lack thereof is one of the leading contributors to unemployment. Such is the case of 26-year-old domestic worker Shagufta Wali who has retired voluntarily after being sexually harassed by strange men over a year ago. “Not only do I want to work, I really need to work for my family,” she says. “But I can’t bring myself to ride the bus again after my last experience and any other transport like rickshaws or taxis are very expensive.” Shagufta is therefore, waiting for a segregated or women’s-only bus system to be established in Karachi so that she may work again.

Perhaps it was for women like Shagufta that the Pink Bus Service (with male drivers but female conductors) was launched in Lahore during 2012, as an effort to offer women harassment-free travel. If successful, the service was to be expanded to other cities in Pakistan, covering as many traffic routes as was possible. Unfortunately, little has been done towards fulfilling this promise. The idea that women are unable to defend themselves and hence, should remain home still plagues most working-class households. Ultimately, this culminates in illiteracy, unemployment and a sense of inertia and instability due to a constructed immobility in the minds of local women, as witnessed in Rukhsana Jabeen. “I have never felt safe sending my daughters to school,” admits the 34-year-old mother of four. “I have this constant worry that the worst will happen – they will either get attacked, raped or murdered and never return home. I discontinued their schooling for this reason. I would rather they remain alive!”

One might question whether the fear of harassment is indeed valid or irrational but it is unfortunate that sleazy catcalls, ‘accidental’ skin contact and ogling have become regular occurrences on public commutes. According to Seher Hafeez, brand strategy and partnerships manager at Naya Jeevan, “Women end up at a loss as the vehicles are overcrowded with men with little ‘safe’ space left for them. Consequently, there is little they can do to avoid unpleasant encounters.” Many like Shamim Bano fall prey to harassment daily on their way to work. “Many times, I have noticed men staring at me with the wrong intentions and there isn’t anything I can do about it!” Passive internalisation and lack of stringent laws discourage these women from lodging legal complaints and so, the cycle continues. “My friends and I have tried to complain but to no avail,” shares Shamim. “Nobody listens. They all ask for proof but how can I possibly give proof of a man staring at me?” This feeling of helplessness not only usurps women’s rights for secure travel, it also begets a sense of resignation and resentment towards working for a particular income.

Additionally, a regular complaint women have regarding local public transport is the lack of a hygienic and aesthetically pleasing environment on the vehicles. “I am a clean person and I pray five times a day. The state of our local busses, taxis and rickshaws is pathetic and I wish there was a more hygienic way for me to travel,” complains domestic worker Helena Aftab. The transport regime which defines most provincial regions of Pakistan is characterised by a general obsolescence with frequent time lags, dirty and torn seats and poor ventilation. 41-year-old Sikandar Butt, who works as a guard in a posh locality of Karachi lends credence to Helena’s woes. “I might be a man but the poor state of affairs of our local transport bothers me just as much,” he shares. “Nobody enjoys having to spend hours in the heat outside, waiting for their bus to arrive so that they can travel home crushed between sweaty and equally-frustrated strangers.” Dearth of finances and the carefree attitude of municipal officials ensure that any measures taken to improve these conditions are futile. The discomfort of having to commute on such vehicles often causes health problems for women like 28-year-old chef Fatima Renu who suffers from chronic backache as a result of walking to and from her workplace every day. “My back has given up and I am exhausted all the time,” says Fatima. “I have seen many doctors but the pain persists. The government refuses to fix public transport and I can either stay home or walk to work.” Women also lose access to basic, quality healthcare or financial inclusion at the cost of the physical and mental trauma of their daily commutes. As a social entrepreneur, Seher has recently taken a great initiative by launching Busanti, a campaign to provide safe and dignified transport” along with “quality healthcare and financial mobility” for the working-class. The project has received grants for women’s-only busses and Seher and her team hope to implement is by the end of the year.

In our nuanced understanding of domestic travel, the crucial question to answer is not what can be done to enhance transport in Pakistan but how important it is that our women progress towards an egalitarian parity with their male counterparts. The experiences of Shagufta, Rukhsana, Shamim, Helena and Fatima all hint at an underlying feminist mindset that seeks to be independant and demands safe public transport so that they can continue working without fear.

If so many women’s issues boil down to transport and commutation, then it is imperative that we revamp, revitalise and rejuvenate the system. This applies not just to the vehicles but the people who use them as well. The prevalent alpha-male ideology, female oppression and other gender stereotypes should not find traction within something as ‘normal’ as transport space. “Taking the bus or walking to work are everyday matters which should not create divisions within society,” says Fatima. “Women resent the men who harass them in public and that is understandable. But the men seem to resent those same women for they are courageous enough to make a living for themselves. I think men feel challenged because of our plight and hence, react in absurd ways.”

A well-functioning, clean, affordable and most importantly, secure transport system is crucial for the socio-economic progress in any country. For the women of Pakistan to advance, our public transport must be made more gender-neutral and welcoming towards the average woman. A woman has her rights in the private and public domain and nothing especially not public transport, should rob her of them.