Fireworks, food and fun for everyone

Fireworks, food and fun for everyone

The two-day Diwali festiv­al marks the defeat of Ravan at the hands of Ram.
Published: November 6, 2010
Tweet Email 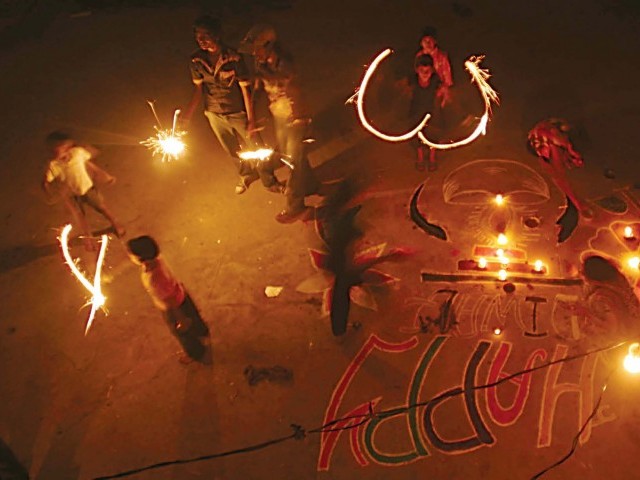 Diwali holds special attraction for children, who get to play with firecrackers over the two-day festival. PHOTO: ATHAR KHAN/EXPRESS

KARACHI: Lights, songs and colour marked the beginning of the Dewali festival on Friday as the Hindu community celebrated the anniversary of the return of Ram – the Hindu god — along with his wife, Sita, and brother, Laxman, from his 14-year-long exile.

Surrounded by the best of their cuisines — cooked to rejoice in the anniversary of Ravan’s defeat at the hands of Ram — the Hindus celebrated the biggest festival in their annual calendar with all the trimmings that the occasion demanded.

Donning new clothes, Hindus gathered outside the Swami Narayan Mandir and the Laxmi Narayan Mandir — the two main Hindu temples in Karachi — to pray to their gods and purchase maalas (garlands to place on the statues), cassettes and CDs of bhajans and paats (religious songs), framed religious pictures, statues of their gods (especially imported from India on the occasion), firecrackers, jewellery, toys and bangles from the stalls set up outside the temples.

According to a vendor outside the Swami Narayan Mandir, a maala imported from India — made of cloth and beads — costs Rs60 while a local version of the same garland costs between Rs10 and Rs15.

The flickering light from clay lamps and light bulbs and the colour from the Rangoli-painted floors added to the festivities as the Hindu community exchanged greetings among themselves.

For the children, however, the biggest attractions were the firecrackers and the kharchi (token money) they received from the elders.

Amid sporadic bursts of sound coming from the Swami Narayan Mandir, where a variety of firecrackers were being tested by young hands, Mahekash and Sagar Kumar said that they love to play with firecrackers in their building because they scare people.

“This is the only time we get the crackers so we don’t miss any opportunity,” said Mahekash mischievously as he and Sagar listed the names of the firecrackers, the most popular being the Peti Bomb, Dholki, Cobra, Kalashan Patti, Gun and the Machis Bomb.

Two students from the NED university, Naresh and Sunil, who came to Karachi from Umerkot and Chelhar, said that the kharchi was the most exciting part of the festival.

“I get enough kharchi to pay for my ticket from the city to the village,” said Naresh, while Shefali, who was visiting the Swami Narayan Mandir, said that she had already collected Rs2,000 as kharchi from her relatives.

“This is a time to unite with your family,” said Bhagwanti, an elderly woman who lives near the Swami Narayan Mandir.

“I bought a sari especially from India this year,” said the old lady, happily explaining how she had already prepared the prasad (sweets) for the pooja (worship) that will take place on Saturday.

Darshu, a peon at an office, said that he had taken two days off to visit his parents and in-laws.

“My wife cooks badam key laddu, qorma, biryani and prasad at the occasion,” he added.

However, for 65-year-old Laxmi, who lives next to Bhagwanti’s house, the celebrations have lost their charm with time.

“I used to make 10 kilograms of mithai with my own hands every Diwali. Now, I neither have the money, nor the energy,” she said, complaining about the increase in prices over the years.

Meanwhile, for most Hindus, the two-day festival holds great joy. After the first say’s celebrations, they get up at 4 am on the second day to exchange greetings at the very moment that Ram had return from his exile. They then visit temples where a mass worship of the goddess Laxmi is organised and exchange prasad with other Hindus.

They are many who wish that they could celebrate the festival in India instead of in a country where they are in minority. But while they may be away from where all the action is, Hindu women nevertheless follow the latest Indian fashion trends on Indian television channels that keep them up to date with all that they have been missing out on physically.

Twenty-one-year-old Paali was very proud to reveal that the parrot-green chooridar “with cap sleeves and high heels” that she was wearing was a copy of the outfit she had seen on a daily soap.

For the most, Hindus said they were happy with their harmonious coexistence with the Muslims. Vijay, the maharaj of the Swami Nararyan Mandir, said that the thousands of Hindus celebrating Diwali or other Hindu festivals in Karachi have never had any serious security concerns.

On Thursday night, the Pakistan Hindu Council (PHC) organised a musical night for Hindu families at the FTC Auditorium to celebrate Diwali.

A PHC representative also invited government representatives at the occasion and announced that this year’s Diwali was dedicated to the flood victims. The council also distributed cheques among flood survivors while a cake was cut to mark the beginning of a happier time.