Collector by the sea: Shell-shock

Collector by the sea: Shell-shock 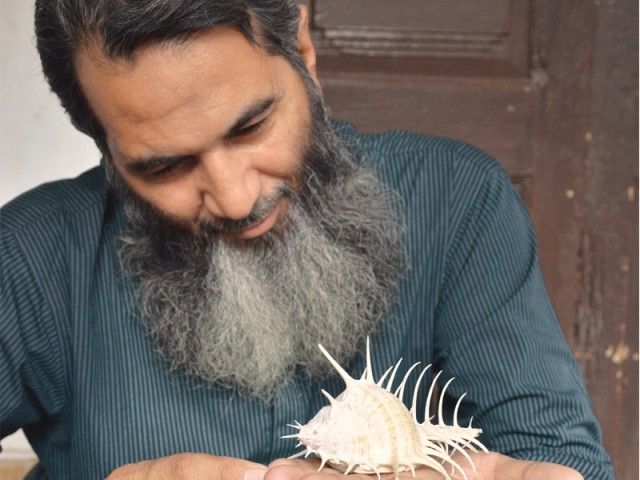 They say that the seaside has a way of seeping into the soul and remaining there. This could not be truer for Muhammad Usman Khan. When his father, a doctor, was deputed to Abu Dhabi in the early 1970s, a time when the Emirate was only a desert by the sea, five-year-old Khan would accompany his grandfather on his daily walks over the sand dunes by the sea. Fascinated by the seashells that lay there glistening in the sun, Khan started collecting them and discussing each new find with this grandfather during the course of their walks. Back at home, his grandmother would use the shells to create objects which served to motivate him to go looking for more.

Decades passed by, and today, Khan is a corporate trainer and an adventure enthusiast living in Pakistan, but his love for seashells hasn’t lost any depth. Khan’s collection is large enough to fill up a small room entirely. It ranges from polished cowries, bivalves, murex, cockles, angel wings, conchs, mother of pearl and other curiosities such as sea urchins, sand dollars, starfish and a minor collection of fossils. All major groups of shells are well represented. As a die-hard conservationist and qualified travel guide, Khan does not believe in gathering corals from his frequent snorkeling trips. Some overzealous junior fans, however, gifted him some along with sea fans that they had picked up years ago. Although Khan does not approve of the practice, these nature’s masterpieces from the ocean’s abyss are now an integral part of his collection. And there is just a glint of pride as he displays them.

“The things to look out for in a shell are its natural beauty and condition,” says Khan. A specimen that has no broken spikes or edges is a good find. “Sometimes I pick up a shell only to find a live creature inside it. I put those down,” he says, adding that he does not like displacing a creature for his hobby. For a shell to make it in his collection, it has to be dead.

“They do not require much maintenance, [only] a good wash after they are picked, and then a little drying and airing under the sun,” says Khan. It is only when he and his wife decide to create something artistic with the shells that they treat the selected shells with a diluted bleach solution. The solution has to be carefully prepared or it might risk dissolving the calcium-rich shell. For the rest of his collection, an occasional dusting does the trick.

Unlike many other hobbies that require one to shell out large sums of money, Khan assures that his does not come at a price. He simply goes on collecting specimens whenever he visits the beach. Khan being the cowry-crazed collector, however, does not hesitate to purchase specimens from other collectors whenever he comes across a unique piece.

Since childhood, Khan has always had an eye for beautiful things. The day he discovered these jewels, he just couldn’t pull away from them. Once when his grandfather refused to take a walk with him, he decided to traverse the dunes himself in search for shells. But he ventured further out than he had intended and lost sight of his house. Disoriented, he climbed the highest dune and located his house from the top. These were the early signs of an avid shell collector in the making.

Although initially Khan’s wife did not approve of her husband carrying bagfuls of shells back home, especially mollusks, she eventually grew fond of them. Today she designs ornaments using those very shells.

“Pakistan is blessed with a rich shoreline that offers different kinds of shells,” says Khan, admitting that over the years, however, with urban growth and increasing pollution, there has been a visible decline in the variety. The number of shell pickers has also increased, making it more difficult to retrieve larger varieties. As a snorkeler, however, Khan adds, almost as if revealing a well-kept secret, “The prospects beneath the surface are still quite bright.” At present, Khan is exploring ways to show off his shells. And the rate at which his collection is expanding, it won’t come as a surprise if it selected to be exhibited at a museum soon.

Muhammad Adil Mulki is a Certified Information Systems Auditor, words for a private bank and is interested in the outdoors, wildlife and science.