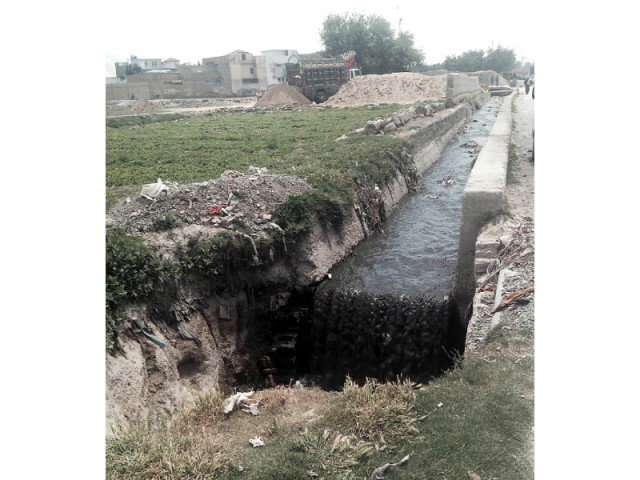 Sewage flows adjacent to land on which vegetables are grown. They are irrigated with this water. PHOTO: BANARAS KHAN/EXPRESS

The provincial capital of Balochistan generates over 700 tons of solid waste every day, but the administration is only capable of disposing of around 300 tons of it. The rest of the sewage meanders in the area, while some of it is used to grow vegetables.

This is a common sight on Sabzal Road in Quetta, which is the main area for vegetable production in the region. The farmers irrigate the lands next to where sewage flows in abundance – and use it for cultivation without a thought.

It is unsightly to see solid waste of hospitals and houses floating over the filthy water in the area. The water flows towards the low-lying area of Quetta Valley. Farmers near Sabzal Road and Spinney Road are known for using this water.

“We have no choice but to consume vegetables grown with the help of sewage-infested water,” shared a resident of Quetta, Ghulam Mustafa, whose family consumes vegetables regularly, as they cannot afford meat on a daily basis.

According to Mustafa, stomach disorders are now commonplace. “We fall ill every now and then because of these contaminated vegetables.” He said that the authorities concerned had been informed about it, but nothing has been done. “People have even requested the farmers to stop growing vegetables like this.”

However, a farmer on Sabzal Road denied using sewage. “We do not irrigate land with dirty water,” he said vehemently. Farmers and vendors in the markets are not ready to accept that the vegetables are not fit for human consumption, though they have an idea that everybody knows the reality.

According to a local vegetable vendor, Muhammad Ali, vegetables are brought from Sibi. “We know that vegetables in Quetta are contaminated,” he said while selling his stock of greens on Joint Road.

It seems there is no stopping the use of contaminated water. Health experts believe that the consumption of these vegetables has led to rise in serious health problems like liver diseases, hepatitis B and hepatitis C.

Deputy Director Environment Protection Agency (EPA) Balochistan, Mohammad Khan, insisted that the supply of these substandard vegetables is injurious to public health. “There are 38 private and four government hospitals in the city, with an improper system of disposing dirt.” He said that the waste is mixed with sewage and is then used for irrigating land. Giving hope, he shared that the government is laying sewerage lines in the city, which would lead to improvement.

A Quetta-based expert on environment, Faiz Kakar, expressed concern over using harmful water for irrigation. “It is due to lack of a proper system to dispose of waste,” he said.

“It is an ongoing trend. More and more growers are doing this,” said Hazar Khan, an ex-farmer.

The government and concerned authorities are aware of the situation and are yet to take action to stop this hazardous practice, while the local administration expresses helplessness.

Quetta  Deputy Commissioner  Abdul Lateef admitted that there are fields where vegetables are being grown using polluted water. “We do not have the power to stop these practices,” he admitted, adding that the local administration did take action against some growers but there is still a lot to be done.