Only 13 distri­ct headqu­arters are suppli­ed with gas, Senate told.
By Iftikhar Firdous
Published: May 26, 2014
Tweet Email 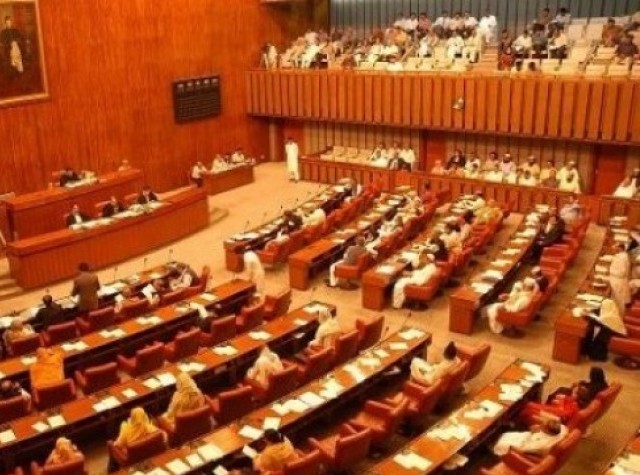 A file photo of the Senate. PHOTO: FILE

Marred by neglect and a deadly insurgency that has left Balochistan in a state of terminal chaos, the province remains the most deprived region in the country when it comes to the supply of natural gas – a resource it has in abundance.

In a startling disclosure in the upper house of parliament, the Ministry of Petroleum and Natural Resources has revealed that out of the 32 District Headquarters (DHQs), only 13 towns have the natural gas facility, with 59% of the urban population in the province still without the basic energy commodity.

These details were revealed in the Senate in response to a question asked by Pakistan Peoples Party (PPP) Senator Karim Ahmad Khwaja. The house was informed that the country, gripped by a chronic energy crisis, faced a gas shortfall that has reached 2,000 million cubic feet per day (mmcfd).

Documents available with The Express Tribune from the Ministry of Petroleum and Natural Resources on the supply and consumption of natural gas show that Sindh contributes the highest amount of gas to the national supply chain amounting to 69% of total supply, while it consumes 45% of gas.

Conversely, Punjab supplies just 4% of gas while it consumes 43%. Similarly, Khyber-Pakhtunkhwa and Balochistan both consume 7% each. While Balochistan adds 17% and K-P contributes 10% to the national gas supply.

Despite being the main producer of natural gas in the country, most Tehsil Headquaters (THQ) in Balochistan suffer from deprivation, with just 25 towns out of 81 being supplied with gas.

In Sindh, however, out of 121 THQs 100 have gas supply while 21 have no access. Interestingly, Punjab fares the best with 114 THQs out of 135 being supplied with gas, resulting in almost 97% of Punjab’s urban population having access to gas.

The data, which is only available for urban areas, indicates that gas supply to rural areas in less developed provinces, like Balochistan, is far worse.

Balochistan is the largest province of the country in terms of its size, the lack of resources that the province itself is abundant with has drawn severe criticism. As a result, last April, Prime Minister Nawaz Sharif had directed the ministry to provide natural gas to domestic consumers across the province within the next three years.