Says the brave people of Pakist­an and the army have the full capaci­ty to take anti-state elemen­ts to task.
By Kamran Yousaf
Published: April 30, 2014
Tweet Email 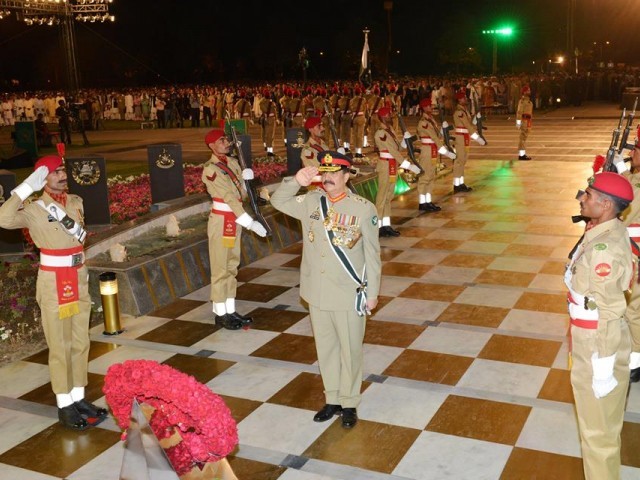 RAWALPINDI: “Pakistan Army supports all efforts to eliminate terrorism and restore peace in the country, and it is our earnest desire that all elements fighting against the state should unconditionally submit to the country’s constitution and law and come back to the national main stream,” said Chief of Army Staff General Raheel Sharif.

Addressing the Youm-e-Shuhada (Martyrs Day) ceremony in the garrison city of Rawalpindi on Wednesday evening, General Sharif asked anti-state elements to unconditionally accept Pakistan’s Constitution and join the national mainstream otherwise the military “with the support of people will take them to task.”

In his first public speech since he became the Army Chief in November last year, General Sharif said that ‘democracy is the only way forward’ to join developed nations of the world.

The ceremony was attended by a large number of dignitaries including Defence Minister Khawaja Asif and former Army Chief Ashfaq Pervez Kayani.

But General Raheel’s carefully worded speech, where he unequivocally supported the democracy and freedom of media indicated that tensions between the civil and military leadership had defused.

However, he made it clear that there was no room for any doubt about ‘our ability to deal with’ insurgents.

“The brave people of Pakistan and the army has the full capacity to take such elements to task,” he stressed.

The Army Chief also spoke on the development work undertaken by the military in the restive Balochistan province.

He also termed Pakistan’s Army as a representative of all the four provinces, key for the national unity, symbol of nationalism and guarantor of the defence of the country.

“The induction of over 20,000 officers and soldiers in the Pakistan army from Balochistan is a testament to the province’s trust in the military,” he remarked.

He also termed Kashmir as a ‘jugular vein’ of Pakistan and called for its resolution in line of the aspirations of the Kashmir people.

“Sacrifices of Kashmirs will not go in vain. Pakistan Army is in favor of peace but is always ready to respond to any aggression in befitting manner.”