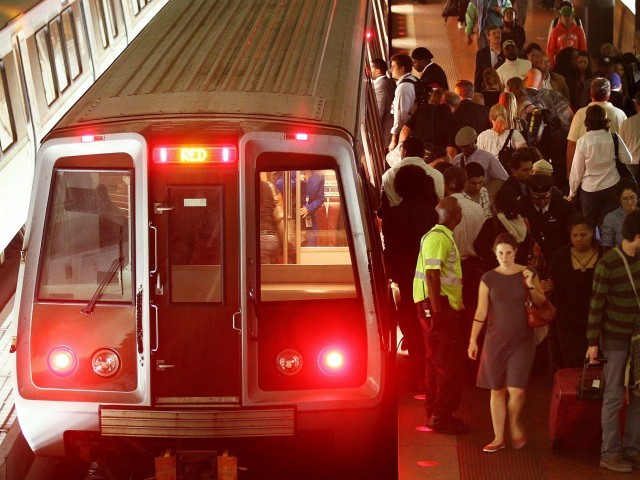 Commuters get on and off a Metro train at the Gallery Pl - Chinatown Station October 27, 2010 in Washington, DC. PHOTO: AFP

WASHINGTON: A Pakistani-American man arrested on charges of plotting to bomb the Washington metro was in training to go to Afghanistan and had experience with firearms, the FBI alleged in a court document released Thursday.

An FBI agent seeking a search warrant told a judge that Farooque Ahmed, 34, “is using his firearms to train for his ultimate goal of travelling to Afghanistan to fight and kill Americans,” according to the document. The agent said that conclusion was based on secretly recorded conversations between Ahmed and people he thought were members of al Qaeda, but who in reality were undercover Federal Bureau of Investigation (FBI) agents. ”

“Ahmed wishes to fight Jihad himself, and (said) that he has trained to do so using various firearms,” the document said. It added that the suspect had previously discussed buying and using weapons, including rifles and a shotgun, and that he had either purchased or attempted to purchase firearms in May 2008 and February 2009.

It alleged that Ahmed said he could teach others the skills he had learned and offered to give 10,000 dollars to al Qaeda “to support their brothers overseas.”

An American citizen since 1993, Ahmed lived in suburban Ashburn, Virginia. He was arrested Wednesday after several months under surveillance as authorities mounted a sting operation.

He had cased out and videotaped several metro stations, including those for Arlington Cemetery and the Pentagon, for an alleged plot to simultaneously detonate bombs in them. Authorities said the public was never in danger. Ahmed faces up to 50 years in prison if convicted.