Man arrest­ed for plotti­ng series of bomb attack­s on Washin­gton's subway with people he believ­e were tied to al Qaeda.
By AFP
Published: October 28, 2010
Tweet Email 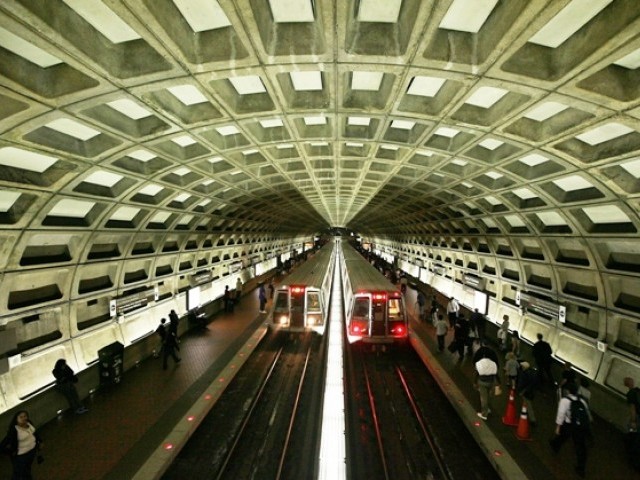 WASHINGTON: Federal officials in Washington arrested a Pakistani-American man Wednesday for plotting a series of bomb attacks on Washington’s subway system with people he believed were tied to al Qaeda.

Farooque Ahmed, 34, had been allegedly observing, videotaping and photographing Metro stations in the Virginia suburbs of Washington, including near the Pentagon and Arlington National Cemetery, since April to plan the attacks set for next year.

Over the course of six months, he allegedly told contacts he believed to be linked to al Qaeda that he wanted to ‘kill as many military personnel as possible’ and suggested where bombs should be planted on Metro trains ‘to kill the most people.’

‘Farooque Ahmed is accused of plotting with individuals he believed were terrorists to bomb our transit system, but a coordinated law enforcement and intelligence effort was able to thwart his plans’ said David Kris, assistant attorney general for national security.

Ahmed, a naturalized US citizen who was born in Pakistan, later appeared in a Virginia court to hear the charges against him.

They included attempting to provide material support to a terror group, collecting information to help plan a terror attack and seeking to help carry out multiple bombings and cause mass casualties in the Washington area.

If convicted, he could be jailed for up to 50 years.

According to the indictment, Ahmed, of Ashburn, Virginia, is said to have spent months doing the groundwork for the attacks after an initial meeting in April with a courier he met at a Virginia hotel.

On several occasions over the next few months, he allegedly photographed, videotaped and drew diagrams of Metro stations, including at Arlington Cemetery, where military personnel and several US presidents are buried.

The targeted stations, which also included Pentagon City and Court House, are among the busiest in the area and are often crowded.

He allegedly gathered information about security and the busiest times at the stations, and handed the data last month to ‘an individual he believed to be affiliated with al Qaeda,’ the indictment said.

The document said Ahmed suggested where to place the explosives on trains ‘to kill the most people in simultaneous attacks,’ and wanted the attacks to take place at the start of the evening rush hour.

He proposed using rolling suitcases to carry the bombs into the Metro stations.

And he wanted an additional attack mounted at another station near the Pentagon, ‘to kill as many military personnel as possible,’ the indictment added.

The US public was never in danger from the alleged plot, and President Barack Obama was informed about it before Ahmed’s arrest, the White House said.

‘No indication of extremist activity’

Ahmed’s neighbor Anushaya Fitzgerald told AFP she was stunned when she learned of his arrest.

‘I came home about noon and there was FBI and cops all over the place’ in the quiet suburban Virginia neighborhood.

There was ‘no indication at all’ that Ahmed, was involved in any extremist activity, she said.

Ahmed holds a bachelor’s degree in computer science from The City University of New York and was pursuing a graduate degree online in risk management and data security from Aspen University, according to a profile in his name on social networking website LinkedIn. It said he was working at telecommunications firm Ericsson.

Ahmed is married and has a small son but Fitzgerald said they had left.

He is being held by US marshals and is due in court again on Friday for a detention hearing.