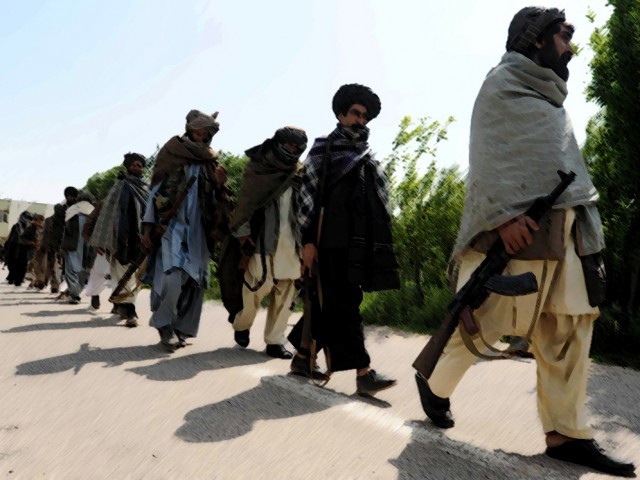 The army, The Express Tribune has learnt, still believes that the TTP and its affiliates are buying time and not sincere about striking a peace deal. PHOTO: AFP/FILE

ISLAMABAD: The government is considering setting up a special panel to investigate the cases of ‘non-combatant Taliban prisoners’ amid reports that the military leadership is reluctant to support the release of such inmates.

Last month the Tehreek-e-Taliban Pakistan (TTP) handed over a list of 300 detainees, including women and children, to peace negotiators and demanded they be freed before the fledgling peace process could pick up pace.

“A group or committee may be set up to investigate the cases of those in detention,” an official privy to developments told The Express Tribune on Sunday. He added that the proposal has been discussed but a final decision on the matter has yet to be taken.

The official asked not to be named in the report because he was not authorized to speak publically on the matter. However, a TTP intermediary also confirmed the development.

“The proposal to set up a committee to exclusively deal with the issue of non-combatants is among several suggestions under consideration,” said Prof Muhammad Ibrahim. “But no decision has been taken so far in this regard,” he added.

According to sources, the proposal was floated to address anomalies in dealing with the cases of non-combatants. The government doesn’t have the records of some of the prisoners on the Taliban’s list, they said.

On Saturday, the government decided to release a dozen more Taliban prisoners ahead of the second round of face-to-face talks with the TTP. Interior Minister Chaudhry Nisar Ali Khan said that some of those to be released figured on the TTP list. The government set free 19 non-combatants earlier, but the Taliban said none of them were individuals they had asked for.

The security establishment, on the other hand, thinks it’s too early to free Taliban inmates. A senior security official told The Express Tribune that the government and the army were on board as far as talks were concerned but “more discussions are needed on the timing of prisoners’ release.”

“It appears that the Taliban are dictating the terms. Where in the world does this happen that a handful of people try to dictate the government,” the official asked while requesting anonymity.

Sources said the military leadership has grown increasingly concerned over the government’s move and believes such releases should have come after ‘tangible progress’ in talks.

“The release of Taliban prisoners has caused great resentment among those who are fighting militancy at the front line,” said another official. “Not only them, but the widows and families of martyred soldiers are upset over the development as well,” he added.

The official said the release of prisoners and other such matters should be an ‘end condition’ and not a ‘pre-condition’.

The army, The Express Tribune has learnt, still believes that the TTP and its affiliates are buying time and not sincere about striking a peace deal.

When asked, the military’s media wing refused to comment on the development saying only the government could talk about the release of prisoners.

A high-ranking government official, meanwhile, dismissed the suggestion that the army was upset over the release of prisoners. “How is it possible that prisoners have been released without the willingness of the army? You know whose custody these prisoners are in,” he asked.