The plant was meant to cater to the water and power needs of over 800,000 people.
By Naeem Sahoutara
Published: April 6, 2014
Tweet Email 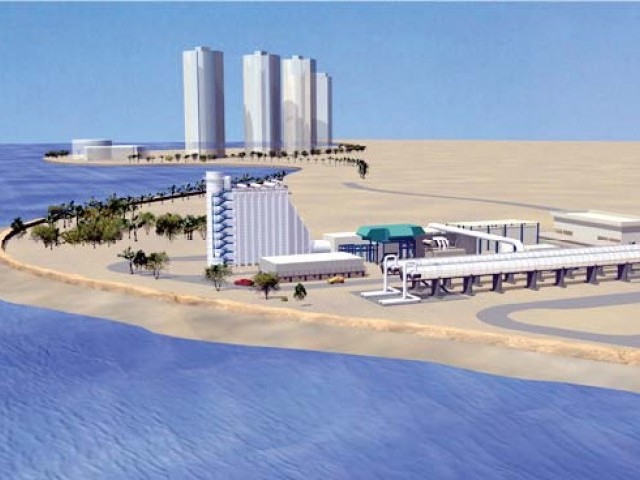 The plant had the capacity of producing 94 megawatts of energy and had production capacity of approximately 14 million litres of drinking water daily. IMAGE: DHACOGEN.COM

Defence residents’ dream of uninterrupted supply of water and power may remain unfulfilled as the Cogen desalination plant heads towards its end.

The plant, built on a 10-acre area in DHA Phase-VIII, is heading towards liquidation, as its owner failed to start full-fledged operations and the lenders are demanding their money back.

The plant had the capacity of producing 94 megawatts of energy and had production capacity of approximately 14 million litres of drinking water daily. It was considered to be a key component of a $600million infrastructure project undertaken by the Defence Housing Authority.

Upon completion, the project was supposed to cater to the water and power needs of approximately 800,000 people. By linking the power plant with a thermal desalination facility, almost 85 per cent of the energy contained in the natural gas was to be utilised.

Unfortunately, the dispute over delays in initiating its commercial operations has taken the matter to court. One of the lenders, IGI Investment Bank, has pleaded to the Sindh High Court to appoint an official liquidator.

In the breach of the terms and conditions, the defendant had initially failed to pay the amount of the finance facility, Jamal told the court recently. On April 10, 2009, the bank sent a legal notice to DHA Cogen Limited, asking it to pay liabilities amounting to Rs174,145,233 within seven days. DHA Cogen failed to pay yet again. The bank claimed that DHA Cogen Limited had initially failed to commence its commercial operations within the stipulated time frame. Once commenced, the same were suspended from September 12, 2008 to February 22, 2009. The operations were suspended a second time in May 2010.

According to the plaintiff, the audited accounts of the defendant showed that its liabilities had exceeded the value of its assets. It could no longer do business in a commercially viable manner, said Jamal.

The court was pleaded to order DHA Cogen Limited to wind up its operations and appoint an official liquidator with all powers of administration of the defendant’s assets.

The bank also sought appointment of a provisional manager, as it claimed that DHA Cogen Limited was likely to dispose of its assets, which would deplete the security credit in favour of the plaintiff and other creditors. The defendant may attempt to manipulate its record, the plaintiff claimed.

In its comments, the Securities and Exchange Commission of Pakistan (SECP) has informed the court that charges have been registered against DHA Cogen Limited.

Meanwhile, it will be residents of one of the country’s most upscale localities, the Defence Housing Authority, who will bear the brunt of the project’s closure.

Speaking to The Express Tribune, the DHA Residents Association general secretary Aziz Soharwardi said that the project could have helped meet the shortage of water and power supply to some extent. “Currently, we receive 7-8 MGD water from the Karachi Water and Sewerage Board. The demand is over 10 MGD.”

He agreed that the DHA should come forward to run the plant, which if liquidated, may be sold at much lower rates.