Only few places in the world, includ­ing Pakist­an, have docume­nted record­s of their breedi­ng.
By Our Correspondent
Published: March 27, 2014
Tweet Email 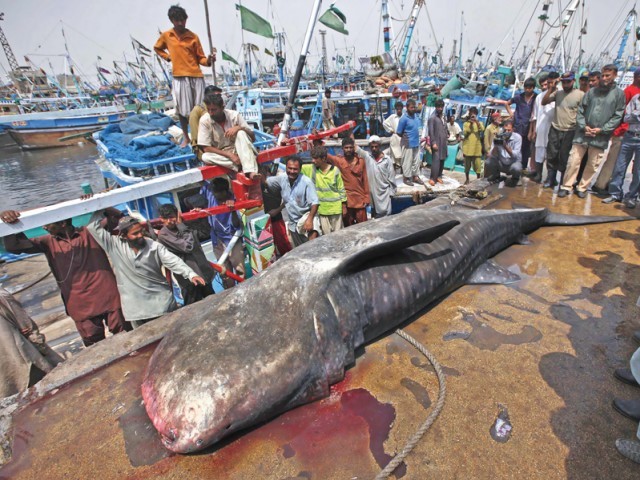 Residents gather around a whale shark after it was brought to Karachi’s fish harbour after it was enmeshed by a shrimp trawler in Balochistan. PHOTO: REUTERS

KARACHI: A five-metre-long whale shark, which was enmeshed by a shrimp trawler in Balochistan, was brought dead to Karachi on Wednesday, where its pieces were auctioned.

The female whale shark was tangled at Phor near Sonmiani. “Soon after its arrival, the fishermen cut it into pieces and auctioned it,” said World Wildlife Fund (WWF)-Pakistan director Rab Nawaz.

“This is an endangered species under the Convention of International Trade and Endangered Species,” he said. “But some cruel people killed it and sold its pieces at throwaway prices. There is no law in Pakistan to protect the shark and take action against the people who violate it.”

WWF-Pakistan has been advocating for the inclusion of this species in Schedule-I of the Wildlife Act of Sindh and Balochistan so that it’s enmeshing, trade and utilisation in any form can be banned. “India has already made the law but we are still waiting.”

The whale shark is found in tropical and subtropical waters of the ocean. It is commonly found in Pakistan. In fact, the first account of their organised fishing is from Pakistan. Luckily this fishery in Pakistan was stopped in the early 1970’s.

Muhammad Moazzam Khan, the former director-general of the fisheries department, stressed on the need to protect whale sharks because the Northern Arabian Sea, bordering the coast of Pakistan, is one of the world’s most important feeding, basking and breeding grounds for them. There are only a few places in the world, including Pakistan and India, where documented records of their breeding are available.

“The whale shark is not consumed in Pakistan but its meat is used for fish meal, the liver is used to extract oil for smearing the hull of fishing vessels and the fins are exported illegally to Hong Kong and China for shark fin soup,” he explained. The fishermen who sold its pieces on Wednesday hardly fetched more than Rs20,000. “This practice should be discouraged by the government.”

Umair Shahid, who has been working in marine fishing for a long time, suggested there should be collaboration between the academia, conservation organisations and fishermen to work towards the conservation of threatened animals. “There is no comprehensive research on biology and other aspects of marine animals,” he said. “All stakeholders should take the necessary steps to protect endangered animals whose population is seriously declining in Pakistan.” He suggested transforming fishing gears to improve fisheries’ management and complying with internationally binding agreements, which Pakistan is a signatory to.

“During the last eight months, four such entrapped whale sharks have been released by the fishermen following an awareness campaign started by WWF-Pakistan,” recalled Khan. “We demand the government to make strict laws and take action against those who kill such endangered species.”