The buzz: Navroze around the world

The buzz: Navroze around the world

Ms T takes a look at Navroz­e celebr­ations in Canada and the many aspect­s of the famous Navroz­e table.
By Teenaz Javat
Published: March 17, 2014
Tweet Email 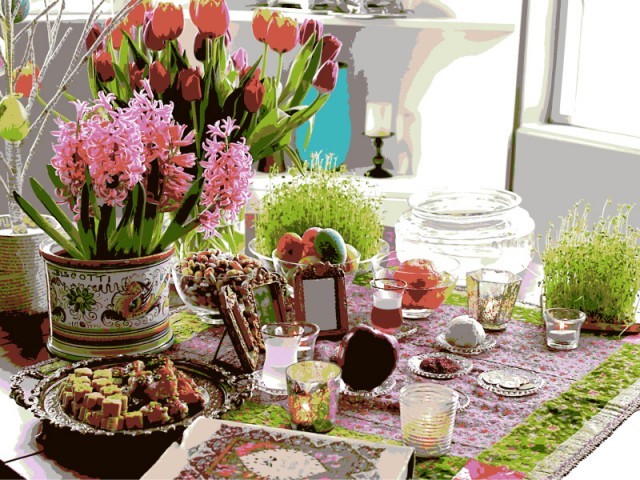 For most people across the world, March 20th signifies little more than early morning rush hours, household chores and office deadlines to meet. They go about their business as per usual which — if you are in this veritable freezer known as Canada — probably includes a whole lot of snow shovelling before you can head out for the day.

But for many Zoroastrians, Agha Khanis, Parsis, Ismailies, Shias and generally, people sick of the snow, March 20th heralds the first day of spring after a long, arduous winter  — a day of celebration, feasting and revelry.

This marks the beginning of the Persian New Year, as suggested by the name Navroze which literally means ‘New day’. Followers from the world over come together at the exact moment of the spring equinox, when the Sun crosses the celestial equator and equalises day and night, ‘officially’ changing the winter into spring.

According to Iranian-Canadian blogger Mayram Nabavinejad, “Navroze is celebrated by millions across Iran, Tajikistan, Uzbekistan, Afghanistan, Iraq, Armenia, Azerbaijan, Kazakhstan — pretty much the entire area that was once the Persian empire.” Although the post-1979 Iranian regime and the Shah of Iran tried to put a lid on the holiday, neither succeeded. It is now the most-celebrated national holiday in the country, spanning a total of 13 days during which many locals travel to the city of Shiraz to partake in celebrations. “Iranians look upon Navroze as a cultural heritage rather than a religious one,” adds Mayram. “It is sort of like Eid, only secular. Navroze is all about rejuvenation and fun.”

If you are familiar with Canadian weather, you can gauge the level of excitement that surrounds the holiday. People fly in (or out) to observe Navroze with their families, children begin planning how they will spend the Eidi they receive and women confine themselves to the kitchen, preparing extensive feasts for the big dinner parties they are hosting at night. Much like them, my Indian-Canadian friend Nergish Kotwal and I head to Toronto’s iconic Persian grocery store, Super Khorak, to shop for goodies. The store becomes a fish market during the two weeks leading up to Navroze: people could very well visit a regular grocery store near their homes but instead hitch-hike to Super Khorak for this holiday.

As we load our shopping carts with pomegranates, watermelons, nuts and tokmeh morgh (painted eggs) etc, Nergish shares stories of Navroze at home. “I have been in Canada for 45 years now and I can’t recall a time when I haven’t celebrated Navroze with my family,” she says.  “I love this time of the year. It is a new year; a new beginning. One can just feel the joy in the air. It is so much fun decorating the Navroze able. I take immense pride in mine. The haft-seen must look immaculate!”

The haft-seen is a symbolic illustration of Navroze wherein a decorative table is set up in every home. The typical haft-seen includes seven items (the haft) which correspond to the seven holy deities protecting them (the seen), each of which hold their own significance. For instance, a metal coin is represents prosperity while the garlic cloves are thought to bring health. Some modern observers also include fish to symbolise life, tokmeh morgh for fertility, candles for enlightenment, shirini (sweet meat) for sweetness, books of poetry for prayer and lastly, a large mirror to encourage self-reflection. Many people strive to make their tables as beautiful as possible for it is a reflection of their good taste as well. A candle is lit for every person living in the home and visitors are requested to look at themselves in the mirror while the hosts sprinkle rose water to anoint them as they come. For centuries, observers have to be gathered at the haft-seen at the exact moment of the spring equinox — 12:57 pm, Canadian time this year — to celebrate.

For Karachi’s Mehereen Bhaijiwala, this year will be her first Navroze in Canada, away from friends and family. “Actually, it will be the first time I said up a haft-seen too,” she confesses. “Growing up in a Parsi household in Karachi was different as we took a lot of our celebrations for granted. My parents didn’t set the haft-seen but encouraged us to enjoy the festivities at our neighbour’s place. It is only after I moved to Canada and my son Mikail was born that I realised that I must recreate these customs in my home to help him understand his roots.” In order to do this, Mehereen decided to plant beans in their garden to fulfil one of the customary elements of the haft-seen, the Sabzeh i.e. home-grown sprouts. “It is such a wonderful learning experience for Mikail. He gets really excited when he sees the beans sprouting. Soon, my haft-seen will be ready and for the first time, it will feel like Navroze in my new home.”

Navroze is all the more significant for it relates to family and ancestry. In some parts of the world, such as Iran, the holiday is observed between the 1st and 13th of the month of Farvardin which literally translates to ‘spirits of the dead.’ This is testament that many observers believe that the spirits of their deceased loved ones descend down to Earth during the last 10 days of the year. One of the most common traditions of Navroze involves families coming together and paying visits to the elderly and sharing delicacies like pastries, rice-cakes and spring fruits. Some, like Mayram travel to across the country to be with family. “This year, I am flying to Vancouver to spend Navroze with my sister and her family,” she shares. “Two years back, we went home to Esfahan to be with my parents and extended relatives. That’s what Navroze is all about: sharing Persian traditions with my loved ones.”

There is something for everyone during Navroze, even those who live in Canada by themselves away from close ones. Every year, the Zoroastrian Society of Ontario, for instance, organizes Bazaar-e-Nauroozi a few weeks prior to Navroze where one can find everything and more that they might require for their haft-seen. Some community members also put up haft-seen displays at the community centre for viewers to admire and steal ideas from.

Waking up early on March 20th, putting on fancy new cloths bought specifically for the occasion, exchanging Eidi, rushing to be by the haft-seen for the moment of the equinox and counting down the seconds to the new year with your loved ones has a charm that can’t be matched by anything else. It may just be another day in the year but for those of us who follow Persian traditions, Navroze is a time to appreciate our culture, friends and family; to reflect on our past and transition into the future hoping for a prosperous year ahead. So Happy Navroze, everyone! May your year be filled with health, love and happiness.

The elements of the Haft-Seen

•  Sib: An apple for health and beauty

•  Seer: Garlic for its medicinal qualities

•  Sikka: A metal coin for prosperity

Hottie of the week: Omar Jamil