The case of the mysteriously disappearing trees

The case of the mysteriously disappearing trees 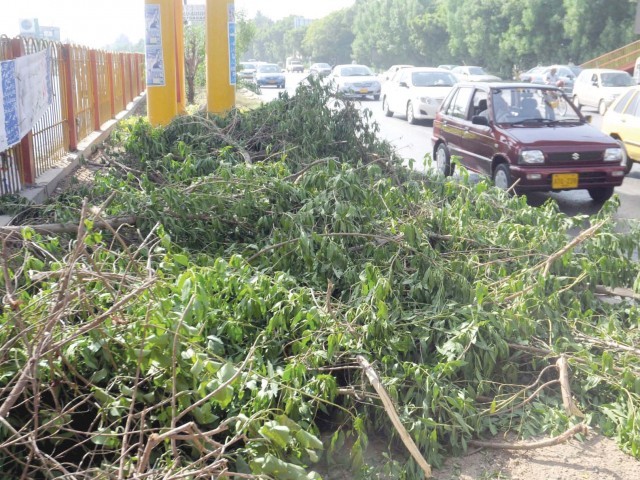 KARACHI: More than 1,200 trees have been cut down on Sharae Faisal, Karsaz Road and other roads because they were blocking advertisement billboards —but no one seems to know who is doing it.

Two authorities are part of the picture: the parks and horticulture department and the local taxes department. Both of them come under the City District Government Karachi. However, top officials from both departments say they have not been cutting the trees.

Talking to The Express Tribune, the CDGK’s executive director for parks and horticulture Liaquat Ali Khan said the local tax department was partly responsible as it had no authority to administer the pruning of trees, especially without consulting and coordinating with other departments. “The city administrator has called for a meeting [on Wednesday] in which this issue will be extensively discussed,” he said. “They [the local taxes department] had earlier asked us to cut the trees, but the administrator stopped them.”

On what he would discuss in the meeting, Liaquat Ali said he would suggest that if an advertiser wants to cut off a tree for the mere sake of a billboard, then his billboard contract should be cancelled. He mainly blamed advertisers for the tree cutting.

But why is the local taxes department being partly blamed? The department is the authority that allows the renting and erecting of billboards and they collect tax from the advertisers, he said.

However, local taxes executive director Rehan Khan expressed shock when asked whether his department had pruned the trees. “We have no authority whatsoever to do so. Yes, we had written a request to parks and horticulture to trim them and maintain the trees’ height at 10 feet,” he explained. The parks department is getting this done themselves, he claimed, adding that the local taxes truck, driver and officer, Aftab Ahmed (who is Liaquat Ali Khan’s younger brother), was at the site on loan to help when the trees were being cut. “Maybe that’s why it was perceived that we were getting it done.”

When asked about his brother’s alleged presence at the tree cutting, Liaquat Ali Khan said that nothing of the sort had happened. If they were our people, we would have known, he said.

The local taxes ED Rehan Khan was of the opinion that trimming trees was a normal and much-needed practice. “Why would an advertiser pay us taxes if his board’s view is blocked?” he said. “We need the income generated by hoardings as the CDGK’s financial state is not hidden from anyone. This is the best resource of the city generating capital.” If the trees grow too tall, they can get entangled with electricity wires as well.

Liaquat said trimming is only done when the tree becomes a hazard for traffic or pedestrians. “We will maybe trim unruly branches of the tree but not chop its height – that too for a billboard,” he said, firmly.

As a solution to the problem, he said billboards should be erected in places where there are no trees planted. “Billboards can be easily relocated. Not trees.”

On their relocation, Rehan Khan said in the year 2006, maps of all 18 towns were made and then permissions were given to put up billboards. “Trees were not planted then.” The local taxes department had no information on the meeting called by the city administrator to discuss the matter.

About the Green Karachi campaign, Khan refuted the claims that the CDGK had been provided funds for the drive. “We planted the one million saplings with the CDGK’s own funds.”