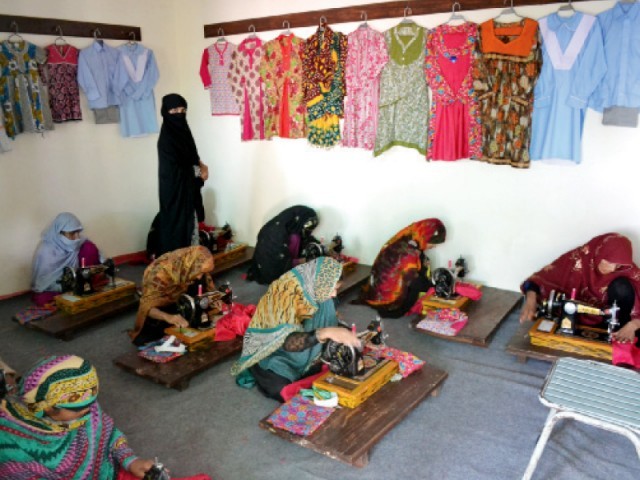 "Due to a lack of rights for home-based workers, jobs from garments and automobiles industries have been transferred to homes," Home-Based Women Workers Federation general-secretary Zehra Khan.

“Very soon, I will give you the good news,” said Junejo to a cheering crowd. The draft has been lying with the chief minister for the last three months.

The auditorium of the Karachi Arts Council was filled with home-based workers to mark the International Women’s Day falling on Saturday. The convention was organised by the Home-Based Women Workers Federation.

Once approved, the policy would be followed by legislation, which would recognise home-based workers as skilled labourers, and award them status equal to those people working in factories.

Junejo shared that he belonged to a hometown where women made rillis and Sindhi topis at home, and he realises the effort and contribution. “These workers are the backbone of our economy.”

The federation’s general-secretary, Zehra Khan, said that they are planning to form a union of home-based workers very soon. She believed that due to a lack of rights for home-based workers, jobs from garments and automobiles industries have been transferred to homes. “The workers are using their homes and their utilities, such as gas and electricity, but they are not even paid the minimum wage.”

She said that officially there is no data but the number of home-based workers is in millions, with 400,000 in Sindh only.

Trade unionist Nasir Mansoor said that 100 years ago the International Labour Day was initiated because of a movement by female textile workers who demanded minimum wage and equal number of working hours.

“Our workers work for 12 to 18 hours but the society does not accept them,” said Mansoor, adding that women are involved in making bangles, slippers, footballs, clothes, bed sheets etc. “I have surveyed that the women in Sialkot are only paid Rs5 per football, while a piece is sold for $35 or higher abroad.”