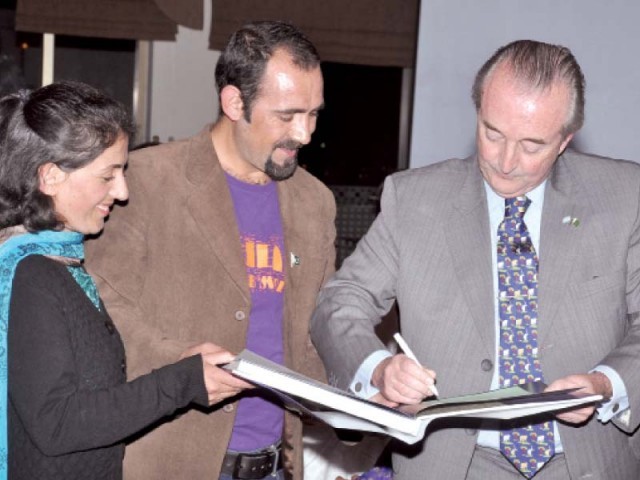 Ambassador Saravia signs a diary as Baig and Ali look on. PHOTO: EXPRESS

It was in the icy desolation of Antarctica that Pakistan’s star mountaineer Samina Baig said she experienced her favourite moment of the “seven summits expedition,” which she and her brother, fellow mountaineer Mirza Ali, are currently pursuing.

“Every mountain is dear to us,” Samina said, with a sense of humility that seems to go hand in hand with endurance in a mountaineer’s book of philosophy. “But my favourite moment so far has been climbing Mount Vinson in Antarctica.”

“You have to walk on a glacier forever,” said the 23-year-old, who in 2013 became the first Pakistani woman to climb the world’s tallest peak — Mount Everest. “There are glaciers everywhere, you cannot see anything else.”

Ali, 29, who said climbing every mountain peak gives him the same exhilaration because he is able to wave the Pakistani flag on the peak, also found Antarctica extraordinary.

“No humans around, very cold, 24-hours of daylight and no porter support,” is how he summed up the journey near the South Pole, before praising his sister for her persistence and bravery.

Baig and Ali were speaking to The Express Tribune before a reception hosted in their honour by the Adventure Diplomacy Group (ADG) in Islamabad on Tuesday evening.

The resolute siblings, who hail from Shimshal valley in Gilgit-Baltistan, returned to Pakistan from Tanzania this past week for a brief break before they head off to the next destination in their expedition of climbing the highest mountain on each of the world’s seven continents.

The ADG, which consists of the Serena Hotels chain and the embassies of Argentina, the US, Russia, Nepal and Indonesia, was formed to provide logistical support to the siblings because “the message they wanted to send out is amazing,” said Aziz Boolani, the chief executive officer of Serena Hotels.

“They are bringing attention to women empowerment, gender equality and environment conservation,” Boolani said. “These are things this country needs.”

Women empowerment is particularly dear to the brother-sister duo.

“It is not necessary that women take up climbing like me,” Baig said. “Whatever their field is, whatever it is that interests them, they (Pakistani women) should work hard in that field.”

“In our patriarchal society and in other Asian countries as well, women do not get the same opportunities as men,” she said. “So, family support is most important.”

Through their example, the siblings believe they can make other Pakistani families also trust and support their women family members.

The siblings are setting a model for the world to see what youth can achieve through dedication and hardwork, said Argentine Ambassador Rodolfo Saravia, who is also the dean of the diplomatic corps in Islamabad.

“Samina is a real example for the world and for Pakistan to show how much Pakistani women can achieve if they commit themselves,” the ambassador said.

The mountaineers are also being financially supported by a Pakistani-Canadian philanthropist, an American national and some New Zealanders.

Mirza and Samina remained tight-lipped about the most challenging moment they have encountered so far in the expedition. “Challenge is another name for life,” Mirza said and Samina mentioned the challenges inherent in climbing. “In other sports, you compete for medals but in mountaineering, it is a matter of life and death,” she said.

But the brother-sister duo seems to derive inspiration from their “mission” to overcome these challenges. “We are not climbing for the sake of climbing,” Samina said. “Our mission…is to empower women and tell Pakistani women there is a lot they can achieve in any given field.”

So far, they have climbed the snowy and windy 6,962-metre Mount Aconcagua in Argentina, the desolate and spectacular 4,892-metre Mount Vinson in Antarctica, and the majestic 5,895-metre Mount Kilimanjaro in Tanzania.

Puncak Jaya in Indonesia, Mount Denali in the US, and Mount Elbrus in Russia still remain on their list, and they plan to attempt scaling them in the same order.

The expedition is also part of Mirza’s three life objectives. The first, now fulfilled, was to see his sister, Samina Baig, climb Mount Everest. His second wish, to climb seven summits on seven continents, is under way.