In conver­sation with Rajmoh­an Gandhi — the man who walks in the footst­eps of the past.
By Faiza Rahman / Photo: Ayesha Mir
Published: February 23, 2014
Tweet Email 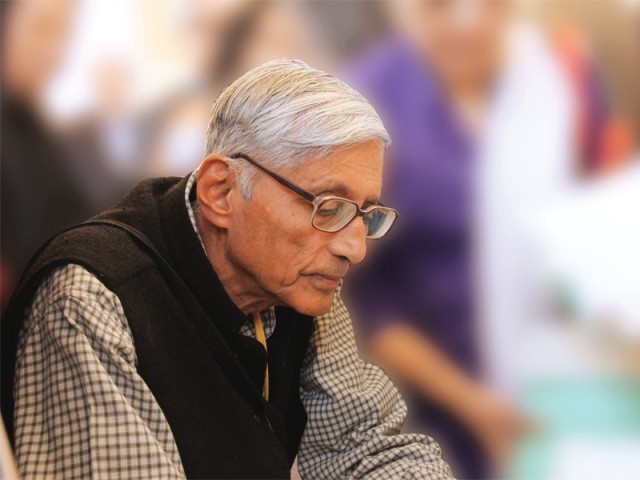 In conversation with Rajmohan Gandhi — the man who walks in the footsteps of the past. PHOTO : AYESHA MIR

Rajmohan Gandhi is lesser-known as the grandson of Mohandas Karamchand Gandhi. He mostly stands his ground as a prolific historian and a key peace builder, smiling from over six feet above. At the three-day Karachi Literature Festival this year, his works were being read and his opinions solicited on a number of topics, giving Pakistanis an opportunity to revisit the much-debated chapter on Indo-Pak history.

At the generalised tête-a-tête, one could not help but marvel at the humility with which the 78-year-old Mr Gandhi conducted himself; he found time to scribble autographs for people gathered in endless queues even after winding up an action-packed session on an unexpectedly hot February afternoon. The progeny of the subcontinent’s preeminent pacifist did not snub anyone, did not end a handshake till a hand was withdrawn and was in no haste to end conversations with fans. Therefore, cornering him separately for a conversation grew more challenging with every ticking moment.

He addressed his Karachi readership in Hindi, English and Gujrati. His latest manuscript, Punjab: A History from Aurangzeb to Mountbatten, was seen in so many hands that it was almost as if it had been distributed for free. At sessions, people peppered him with questions on his biography of the independent Pashtun activist Bacha Khan, proving that Mr Gandhi’s works have long resonated with Pakistani audiences. There were multiple requests that he write a biography of Jinnah for Pakistanis, to which he replied with a chuckle, “I am almost 80 now!”

When he finally settled into a conversation with The Express Tribune, he spoke passionately about his family, his taste for historical studies and his travels in Pakistan.

“I have, unfortunately not travelled to Balochistan. Apart from that province, I have frequented the urban areas of Sindh, Punjab and Khyber-Pakhtunkhwa,” Mr Gandhi stated. When asked if Pakistan’s cordiality towards him varied with geography, he replied: “No; in fact, it has varied with time. Now, people in both India and Pakistan are more receptive to the concept of a peaceful subcontinent. I think it has to do with the fact that the West is no longer a stable ally; states have to be self-sufficient and can no longer afford to sustain hostilities.”

Along with a lesson in history, Mr Gandhi was full of advice for Pakistani parents. He confessed to never having manipulated his children into adopting any career paths. “Despite that, to my great delight, both my daughters steered towards the humanities and social sciences. My daughter, Supriya Gandhi, studies literature and history, can read Persian and Arabic and holds a PhD from Harvard,” he said proudly. “There is no doubt that one has to be somewhat of a rebel to study the humanities or the social sciences in India or Pakistan. I agree that just as it is in Pakistan, parents in India want their children to become doctors and engineers, or study business at the [most].”

But he cautioned that a utilitarion approach had its drawbacks. “Seeking knowledge should be an enjoyable venture,” said Mr Gandhi, who has, of late, been researching and teaching global studies at the University of Illinois at Urbana-Campaign. Indeed, he lamented the lack of focus on the humanities in the subcontinent, and the fixation to study technical subjects. “It is indeed what one may call a ‘Third World phenomena’ — study only what brings in immediate monetary benefit.”

Mr Gandhi’s route to the study of history was, however, one which he describes as ‘natural’. His father edited the Hindustan Times. He himself ventured into journalism for a few years after college-level studies, and during the 1975-1977 Emergency in India, wrote a popular, strongly pro-democracy weekly column for the local press. It was simply a switch from an intellectual endeavour of one sort to another. “I don’t care whether the study of humanities can thaw the ice between Pakistan and India; I just wish youngsters today would study more literature, philosophy and history, even if these studies fuel unprecedented arguments between scholars of India and Pakistan.”

As he spoke, people attending the festival listened. Why, after all, was Mr Gandhi so well-loved here? “Because people are tired of politicians on either side who have built these walls of territory, and of history,” he said. “People in Pakistan know that I, despite being a Hindu, despite being an Indian, am not much different.”

Some attendees tried to cut the queue, while others argued with volunteers. A gentleman in a crisp, white shalwar kameez pleaded to break the line: “Please, I have come all the way from Rajasthan to give him this.” He produced a copy of M K Gandhi’s biography in Sindhi. “He must read this!” Someone draped an ajrak on his shoulders and another slipped a note to him. And as the din rose, harried-looking Karachi Literature Festival volunteers knew that they had lost their lunch break.