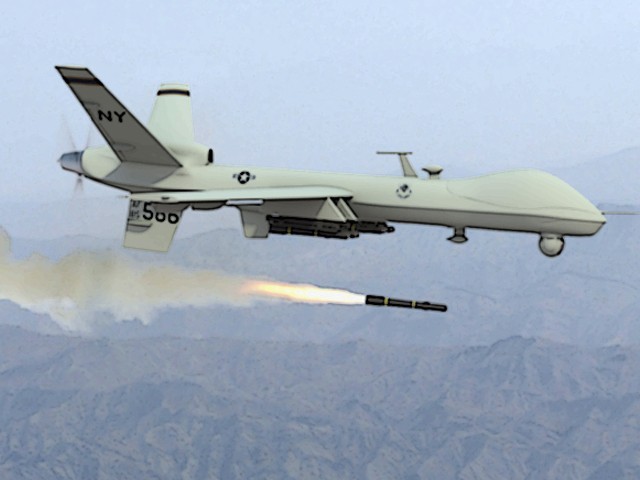 A photo of a drone firing a missile. PHOTO: AFP

The US has decided to cut back on the number of drone strikes on the Pakistan government’s request for a pause, while it pursues peace talks with the Tehreek-e-Taliban Pakistan (TTP), The Washington Post reported on Wednesday.

US administration officials have praised Prime Minister Nawaz Sharif’s efforts to address serious structural problems in Pakistan and to promote peace in the region, the report said.

A senior administration official, in response to queries, denied that any informal agreement had been reached, saying that “the issue of whether to negotiate with the TTP is entirely an internal matter for Pakistan”.

On Monday, Prime Minister Nawaz Sharif told a group of senior journalists in Lahore that the Americans have no objection to the government’s peace overtures. He said the US has been told of Pakistan’s decision to conduct peace talks with the Taliban and that no one, including President Barack Obama, has raised any objections whatsoever.

According to the Post, the United States halted the drone strikes for now on the request of Pakistani authorities. “That’s what they asked for, and we didn’t tell them no,” the report quoted a US official as saying.

Reacting to this, Foreign Office spokesperson Tasnim Aslam told the BBC Urdu that “Pakistan does not want a temporary halt [such as this one], but wants a complete end to drone strikes on its sovereign territory”.

“The truth is that we had been telling the United States to end the drone programme for a long time as it not only targets innocent civilians but also violates our sovereignty.”

The international community has acknowledged that drone strikes are counterproductive and US President Obama also admitted to this fact during his State of the Union address, she said.

In response to the decision that the US would still carry out strikes against al Qaeda targets, Aslam said, “First, the US has to prove that al Qaeda’s senior members are in Pakistan.”

While strikes in Pakistan appear to have temporarily halted, they have continued in Yemen, including recent attacks that have reportedly killed civilians.

White House officials say President Obama’s constraints on the drone programme are meant to allow the continuation of strikes against terrorist groups, but under rules that are less likely to incite hostility towards the United States.

“The president has made clear that even as we aggressively pursue terrorist networks, through more targeted efforts and by building the capacity of our foreign partners, America must move off a war footing,” said White House spokeswoman Caitlin Hayden. “We will not be safer if people abroad believe we strike within their countries without regard for the consequence.”