Endangered marine turtle surfaces in Pakistan, Donatello yet to arrive

Endangered marine turtle surfaces in Pakistan, Donatello yet to arrive

This is the first time that the Hawksb­ill sea turtle has been report­ed in the countr­y.
By Our Correspondent
Published: January 18, 2014
Tweet Email 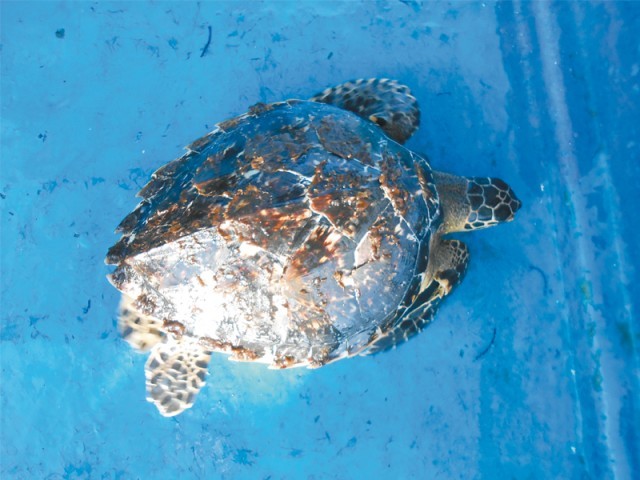 The Hawksbill turtle, easily recognised thanks to its unique beak, which was caught by fishermen off the coast of Balochistan. PHOTO COURTESY: WWF-PAKISTAN

KARACHI: An endangered marine turtle, the Hawksbill, was caught by a tuna gillnet from offshore waters near Ormara on the Balochistan coast.

This is the first time that the Hawksbill sea turtle – scientifically known as the Eretmochelys Imbricata – has been reported in the country. The Leatherback turtle, another rare species, also paid a welcome visit to the country last year when it was reported near Sur, Balochistan. The Leatherback was successfully released by the WWF-Pakistan with the help of other environmental organisations and local communities.

WWF-Pakistan’s director Rab Nawaz confirmed that the Hawksbill was declared critically endangered in 1996 under the International Union for Conservation of Nature Red Data List since it has seen a drastic population decline of 80 per cent.

“The Hawksbill turtle in Pakistan is a welcome new addition to the diversified marine fauna of Pakistan,” said Nawaz. “In the Indian Ocean the turtle is distributed from the African coast to the Persian Gulf and can also be found in India and the Far East.”

The Hawksbill can easily be distinguished from other turtles thanks to its sharp curved beak and the saw-like appearance of its shell margins. It can grow up to one metre in length and has an average weight of 80 kilogrammes. However, the one that has been caught has been measured at a mere 47 centimetres.

The turtle was caught by fisherman Shah Zamin’s tuna gillnet boat ‘Al Gul Muhammad’. The boat had left on a fishing expedition on November 22 and returned after 57 days.

WWF-Pakistan technical advisor on Marine Fisheries Muhammad Moazzan Khan said that the Hawksbill is listed in Appendix-I of the Convention on International Trade in Endangered Species, which means that it is illegal to import or export turtles or to kill, capture or harass them.

“The WWF-Pakistan has started training fishermen to release turtles that are accidently caught in their fishing gear,” he added. “Vital data about the hawksbill turtle was recorded, after which it was successfully released back into the water.”

While Hawksbills are mainly omnivorous, their principal diet consists of sea sponges. They also feed on algae, cnidarians, comb and other jellyfishes and sea anemones. Hawksbills usually lay around 140 eggs at a time and the eggs take 60 days to hatch. The turtles mature in 20 years and lay eggs every two or three years. There is no authentic record of Hawksbills breeding in Pakistani waters but coastal communities report typical Hawksbill tracks in a few isolated areas along the Balochistan coast.

The two main marine turtle species in the country are Green turtles and Olive Ridley turtles, with the Green turtle being the most common one, nesting along the Sindh and Balochistan coasts. World Wide Fund for Nature (WWF)-Pakistan located a large population of Olive Ridleys in Pakistan’s offshore waters but no recent sightings have been made.

Death toll rises: Those who guard us