Providing justice: Police probe into the targeted killings of policemen

Providing justice: Police probe into the targeted killings of policemen 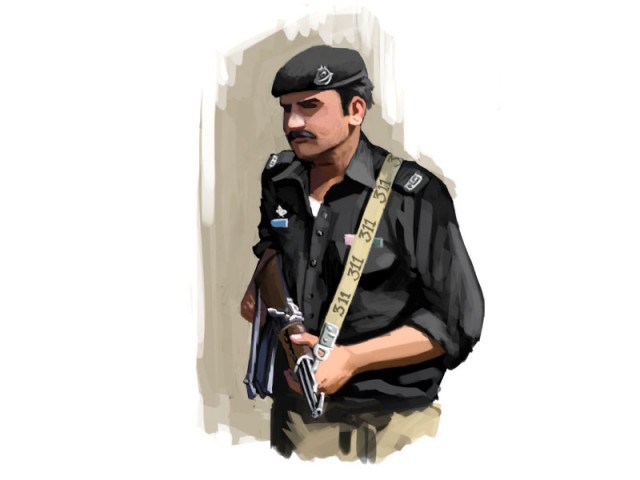 At least five policemen were gunned down during the first five days of 2014. ILLUSTRATION: JAMAL KHURSHID

KARACHI: Police have registered a case against Taliban for attacking the shop of an Awami National Party (ANP) leader in which two policemen lost their lives on January 5.

Though Buneri and law enforcers believe that Tehreek-e-Taliban Pakistan militants were behind the attack, police have registered a case on behalf of Buneri against Taliban.

“I was receiving threatening phone calls by a person who identified himself as Sajjad – a representative of TTP-Swat,” Buneri told The Express Tribune. “I have named the TTP man in the FIR and now it is up to police to investigate the case.” Buneri also appealed to the government and police higher ups to provide him security.

“We cannot disclose the identities of the Taliban men who were named in the FIR,” Baldia Division SP Malik Muhammad Ehsan informed The Express Tribune. “A group has been traced and we are making an effort to arrest them on an immediate basis.”

At least five policemen were gunned down during the first five days of 2014. Earlier, two policemen were shot dead on January 4 when armed motorcyclists opened fire at a police mobile belonging to the Pirabad police station, while another policeman was shot dead in Sacchal.

Following the frequent killings of law enforcers, police have launched an operation at Taliban hideouts in district West and have been conducting a door-to-door search operation.

During this operation – which covers areas such as Qasba Colony, Frontier Colony, Orangi Town and Pirabad – police have detained around 58 suspects. However, the identities of the suspects have not been disclosed and they have been shifted to an undisclosed location for further questioning.

“We have detained 58 suspects,” confirmed Orangi Division SP Chaudhry Asad while talking to The Express Tribune. “Now we have to identify the suspects involved in the targeted killings of policemen and other heinous crimes.”

Meanwhile, Karachi AIG Shahid Hayat announced that all police personnel killed recently have received posthumous promotions and their relatives will be given jobs in police while Baharuddin Babar, who was killed last year, is also being considered for a promotion.