International law compliance: UN adopts resolution against use of drones

International law compliance: UN adopts resolution against use of drones 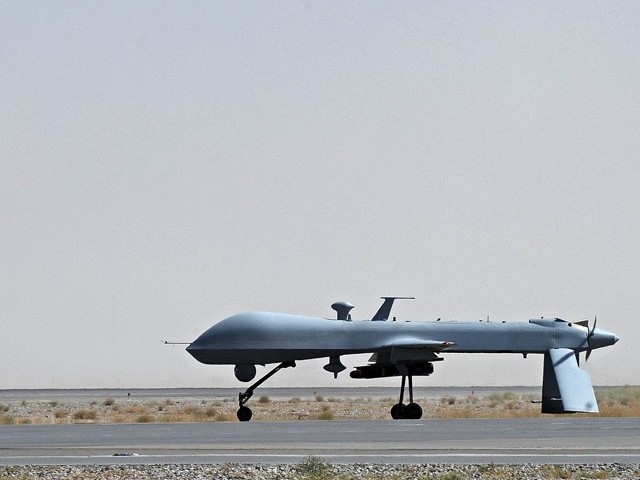 The United Nations General Assembly adopted a unanimous resolution against the use of armed drones in foreign territories in what Pakistan claimed to be a ‘moral victory’ for the country.

The 193-member body adopted a resolution on Thursday urging the United States to comply with international laws for its use of unmanned aerial vehicles for taking out ‘high value targets’ in countries. This was the first time that the issue of drones was raised in a UN resolution.

The reference to the controversial drone programme was contained in a 28-page UNGA resolution titled ‘Protection of Human Rights and Fundamental Freedoms while Countering Terrorism.’

The resolution urged member states to ensure that any measure taken or means employed to counter terrorism, including the use of drones, comply with their obligations under international law, including the Charter of the United Nations, human rights law and international humanitarian law, in particular the principles of distinction and proportionality.

It laid emphasis on the urgent and imperative need to seek agreement between states on the legal questions pertaining to the use of drones.

In its official reaction, Pakistan immediately took credit for the unanimous resolution against drone strikes. “Pakistan successfully coordinated with like-minded states to include references to the use of drones in the resolution,” said a statement issued by the foreign ministry.

The statement reiterated Pakistan’s stance that drone strikes have “serious human rights and humanitarian implications”. The issue will also be taken up by the UN Human Rights Council in its March 2014 session, it added.

Foreign Office spokesperson Tasnim Aslam said the present government had been raising the issue of drones at all relevant international forums, including the United Nations, to muster international public opinion against the use of drones. She also recalled that Prime Minister Nawaz Sharif, in his address to the United Nations General Assembly in September, strongly raised the issue of drones.

Meanwhile, Information Minister Pervaiz Rashid termed the UN resolution a “marvellous achievement” that has been accomplished after a long drawn-out struggle. “The Pakistan Muslim League-Nawaz (PML-N) government had set the issue of drones as a priority and there were clear directions for the envoys in Pakistan’s missions abroad and the permanent envoy in UN to raise the issue at every forum to safeguard Pakistan’s integrity and sovereignty,” he told The Express Tribune.

However, other political parties begged to differ. Leader of the Opposition Khursheed Shah said that PML-N should not claim sole credit as previous governments had also advocated Pakistan’s stance against US drone strikes.

Pakistan Tehreek-e-Insaf’s MNA Asad Umer said his was the only political party that rendered true and practical efforts to raise its voice against drone attacks in Pakistan’s tribal region. He added that recent announcement of the Khyber-Pakhtunkhwa government – led by PTI – to block NATO supply lines in protest against the drone strikes built significant pressure on the US and the international community.

“Imran Khan has been very vocal on the issue and bringing international focus on the issue of drones goes to PTI’s credit,” claimed another PTI member Naeemul Haq.

The torch-bearers: AKU graduates vow to ‘give back’