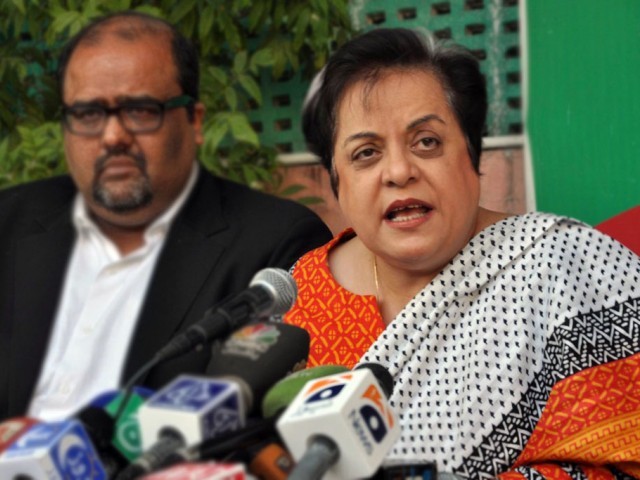 Mazari said the names of the remote pilot of the drone that targeted the madrassa in Hangu was not known at the moment but could be ascertained through interrogation of the man she identified as CIA’s station chief. PHOTO: ZAFAR ASLAM/EXPRESS

Pakistan Tehreek-e-Insaf (PTI), the ruling party in Khyber-Pakhtunkhwa (K-P), has nominated the Central Investigation Agency (CIA) director, John Brennan, and a man it identified as the agency’s station director in Islamabad for the Nov 21 drone strike in Hangu district that killed six people.

The party’s central information secretary, Shireen Mazari, in an application sent to the K-P police chief, district police officer, Hangu, and station house officer, Thal police station, requested that the names of the CIA officials be included in FIR No. 555 that was registered against unknown persons.

“I, on behalf of my party, the PTI, would like to nominate CIA’s station chief in Islamabad and the agency’s director John O Brennan for committing gross offences of committing murder and waging war against Pakistan as indicated in the FIR lodged in your police station,” Mazari said in the application. She wouldn’t say from where she got the name of the person she identified as CIA station chief in Islamabad.

In 2010, Washington had recalled its top spy from Pakistan after threats were made against his life when a tribesman filed a lawsuit against him. The then CIA director, Leon Panetta, and defence secretary Robert Gates were also named in the case.

Giving details at a press conference, Mazari said the application states that the CIA station chief was running an illegal clandestine spying operation throughout Pakistan, especially in K-P and tribal areas. “He and his allies throw a GPS (Global Positioning System) device at a target, house or car, and the drone (unmanned aerial vehicle), which is remotely controlled from an undisclosed location, strikes at the target,” she added.

In her application to the K-P police presented before the media, she said the accused might try to flee the country; therefore, it is requested that the ministry of interior be contacted to put his name on the Exit Control List (ECL).

Comments from US embassy

When contacted by The Express Tribune, the US Embassy spokesperson said: “We are aware of PTI’s statement.  I can’t speak to alleged operational issues, but more broadly speaking I note we have a strong ongoing dialogue with Pakistan regarding all aspects of our bilateral relationship and shared interests. It is critically important that we continue to work closely with our partners throughout the world, helping to build their law enforcement capacity to carry out CT (counter-terrorism) operations in their own countries.”

Who held the joystick?

To a question, Mazari said the names of the remote pilot of the drone that targeted the madrassa in Hangu was not known at the moment but could be ascertained through interrogation of the man she identified as CIA’s station chief. “If the PTI discovered the name through its own sources, it will share it with the police,” she added.

Mazari claimed that the CIA station chief lived and operated from the US Embassy in Islamabad, which is a clear violation of diplomatic norms as a foreign mission cannot be used for any criminal activity within a sovereign state. “The CIA station chief is not a diplomatic post and therefore he does not enjoy diplomatic immunity and is within the bounds of domestic laws of Pakistan,” she said.