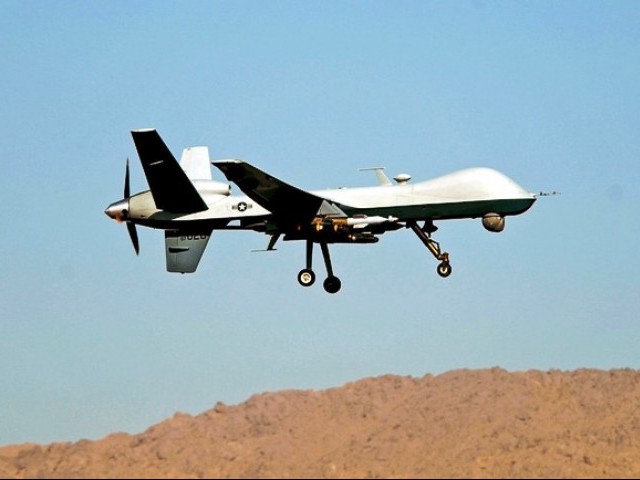 PESHAWAR: A First Information Report (FIR) of the US drone strike which killed six persons including a Taliban commander was filed against unidentified persons in Hangu on Friday. This is the first FIR of its kind in Pakistan.

The FIR was registered in the police station in Tal area of Hangu in K-P. Sections for murder, attempted murder, explosives and terrorism were included in the document.

The SHO of the police station Farid Khan said that FIR number 555 stated that unidentified persons had launched four missiles in the drone strike on November 21.

Khan said the case was filed on the directives of provincial government and the unidentified persons were charged against 302, 3/4, 427 and 7ATA of Pakistan Penal Code.

The SHO revealed that the victims of the drone strike were from Afghanistan and the deceased were indentified as Noorullah, Hamidullah, Ahmed Jan, Gul Marjan and Abdul Rehman.

The FIR mentioned that no children were killed in the attack.

Khan also stated the local people informed him that the victims of the Hangu drone attack were taken to Afghanistan for burial. As a result post-mortem of the deceased was not possible. Further investigations are underway by the police.

On November 21, a drone had fired missiles at a madrassa in the Tal area of Hangu, killing six people and injuring at least eight others.

This was the second drone strike in K-P in five years. An unmanned aircraft had earlier fired missiles in K-P’s Bannu area in 2008.

Pakistan on November 22 had conveyed its ‘deep concerns’ to the US over the Hangu drone strike, and demanded an ‘immediate cessation’ of attacks in the country.

“The Government of Pakistan has strongly condemned the US drone strike that took place in Hangu district of the K-P province on November 21, 2013,” the Adviser to the Prime Minister on Foreign Affairs Sartaj Aziz had said yesterday, according to a press release issued by the Ministry of Foreign Affairs.

The statement had added that Pakistan government’s concerns were relayed to the US Ambassador in Islamabad on November 21, and it was reiterated that such attacks were particularly worrying given Prime Minister Nawaz Sharif had just spoken against the strikes to President Obama during their bilateral meeting in October.

The Khyber-Pakhtunkhwa (K-P) government had decided to organise a mass protest in Islamabad against the controversial US-sponsored drone campaign during an emergency meeting of the K-P cabinet on November 22.

On November 20, the United States had assured Pakistan that it will temporarily call off the controversial drone campaign if the Taliban sat across the table with government negotiators for peace talks, Sartaj Aziz had revealed.