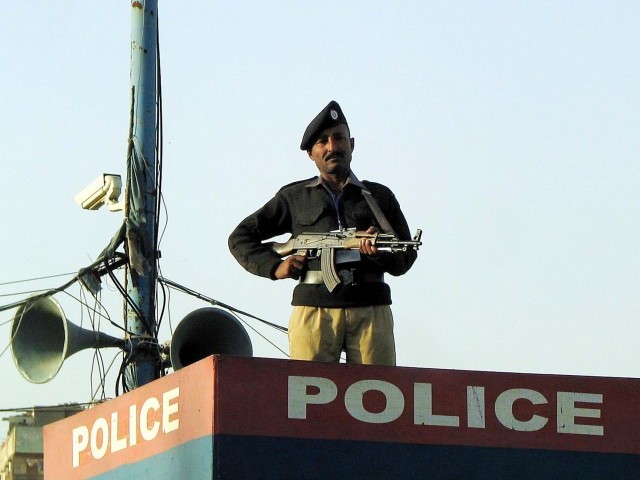 KARACHI: The second attack on a police mobile in less than a week indicates that the Sindh police seem to have become a frequent target for terrorists. Officials suspect that the attack was in retaliation to the killing of two alleged terrorists earlier on Saturday night.

The attack occurred on Sunday when the police mobile was on routine patrol in SITE Industrial Area. Unidentified assailants lobbed a locally manufactured bomb device at the mobile, injuring two personnel, Gulzar and Fahim, as a result. The injured officials were taken to Abbasi Shaheed Hospital where doctors termed their condition out of danger.

Police officials, meanwhile, are still mystified by the incident. “It happened all of a sudden,” SHO Atiqur Rehman told The Express Tribune. “The officials in the van did not even see the attackers.”

This was the second such incident to have occurred in less than a week. On November 18, two police officials and a sub-inspector were wounded when armed motorcyclists opened fire at their police mobile in Nazimabad. Police officials believe that members of banned militant groups, especially the outlawed Tehreek-e-Taliban Pakistan, are behind most of the attacks. A senior police official even said that the latest attack on Sunday was prompted by the killing of two terrorists by the police earlier on Saturday night.

On Saturday night, police killed two alleged terrorists affiliated with the TTP, Abdullah and Wahabullah, in an alleged encounter. Both terrorists had been arrested a week earlier by the Rangers and had been handed over to the police. Their arrests had been disclosed in a press conference by District West police chief DIG Javed Odho at his office. They were accused of killing at least 16 police officials and four police informers in SITE and its adjoining areas.

According to officials, the alleged terrorists had been detained in the lockup of Mochko Police Station from where they managed to escape. “They escaped to Baldia Town after escaping from the lockup by breaking the windows,” said SHO Shafiq Tanoli. “The police managed to follow them and both were killed in an encounter a few hours later.”

On the other hand, police sources told The Express Tribune that the alleged terrorists were killed in a pre-planned ‘encounter’. “The police killed them to avenge the killings of 16 of their colleagues,” said a source privy to the matter. “They could have been killed before their arrests were made public but their killing after the disclosure made the case stronger for the police officials.

The police officials concerned, however, refuted these claims, saying that the killings were not pre-empted. When asked how the alleged terrorists managed to get weapons after their escape from prison, DIG Odho said, “They were aided by other TTP members in their escape, who attacked the police when we chased them.” He added, however, that an inquiry had been initiated against the police officials who had been on duty at the time.

Meanwhile, DIG Odho expressed hope that the police will be able to round up all the culprits soon. “We have arrested and killed many of the TTP men involved in the targeted killings of police officials. The remaining few will be arrested soon.” He was of the belief that the recent attacks had been carried out by the same group.