Anti-peace elements behind blasts in K-P not TTP: Imran Khan

Anti-peace elements behind blasts in K-P not TTP: Imran Khan

PTI Chairm­an Imran Khan reiter­ates the banned group should be allowe­d to open an office to facili­tate peace talks.
By Our Correspondent
Published: October 20, 2013
Tweet Email 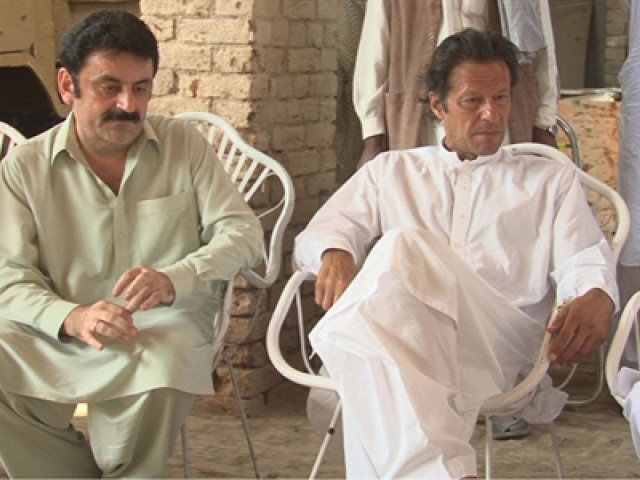 Tehreek-e-Taliban Pakistan (TTP) has not taken responsibility for the three major attacks in Peshawar, stated Pakistan Tehreek-e-Insaf (PTI) Chairman Imran Khan during his visit to DI Khan on Saturday.

Imran was there to offer condolences for slain lawmaker Israrullah Gandapur who was killed alongside nine others in a suicide blast in his hujra in Kulachi, 45 kilometres from DI Khan, on Wednesday.

The PTI chief pinned the blame on elements allegedly against the non-starter negotiation process between the state and TTP. Talking to journalists in Kulachi during his visit to the house of the deceased Khyber-Pakhtunkhwa (K-P) Minister for Law and Parliamentary Affairs, Imran stipulated those against peace talks are responsible for such attacks in K-P.

If the TTP did not take responsibility of the attacks, if the TTP washed their hands off the attacks, then someone else must be behind these incidents, argued the PTI chief.

Discussing the decision taken in an all-parties conference (APC) after general elections, Imran pointed out the dialogue process would be easier if the Taliban were permitted to open an office. All the major political parties have given the federal government “a green signal” to pursue talks with the banned group but, Imran claimed, his party is yet to be informed of developments made towards this effort.

“Those who support the war against the TTP call me a coward,” said the party head. “Then the nation needs to know what main objectives were achieved in a nine-year-long war against militancy.”

The K-P government has formulated a new security plan and policy, shared Imran. The PTI is also the first party leading the province which has raised its voice for talks with the Taliban, he claimed. However, earlier in February, the Awami National Party had also called for an APC which agreed to negotiate with the Taliban.

“It is now up to the centre to devise a plan to launch peace talks with the Taliban.” In addition to his rank as PTI chairman, Imran is also the MNA for NA-56 Rawalpindi-VII.

Correction: An earlier version of the article incorrectly stated that Imran Khan is the MNA of NA-71 Mianwali. The error is regretted.