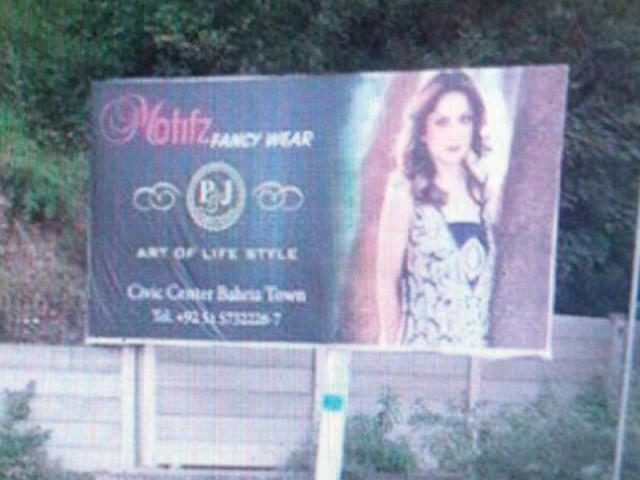 Motifz claims that even their logo was used in the advertisement without consent. PHOTO: PUBLICITY

It seems there is no limit to flagrant brand identity theft in Pakistan. Model Saima Chinoy spotted this billboard in Islamabad recently. Others would have barely noticed anything wrong but as the model in the picture, she was horrified to see the shoot she had done for designer Ayesha Farook Hashwani, was apparently advertising Motifz.

Hashwani was similarly appalled. “This was a shoot we did last February which was actually used as a cover for our Facebook Page and is still on the page. I don’t know much about Lahore-based brand Motifz but it’s shameful for a brand to blatantly use someone else’s shoot on their billboard,” she said.

She tweeted this to highlight the brazen use of her shoot without her consent. But this is where the story gets tricky. Motifz themselves were shocked by this picture of the billboard, which they say has nothing to do with them. “This billboard advertises P&J Emporium in Bahria Town, Rawalpindi. We have no outlet there and we do not have any direct connection with P&J Emporium. They have used our logo without our consent and we are looking into taking legal action against them.”

P&J Emporium is a well-known shop in Rawalpindi stocking clothing and home wares. Their e-store shows that their online women’s section consists mainly of designer lawns and silks. When contacted, P&J Emporium confirmed that they do stock Motifz but that they do not stock Ayesha Farook Hashwani. Mr Hasan Ahmed Khan CEO of Motifz categorically denies that they directly supply P&J Emporium but says that they may be buying from his outlets and selling to their customers.

“It’s a defamation of our brand for them to take our logo and put it on a billboard with Ayesha Farook Hashwani’s shoot. We do dozens of shoots every year as you can see from our Facebook page and website. We have no need to use anybody else’s campaigns. We are as much a victim in this as Ayesha Farook Hashwani.”

Legal recourse is a long, expensive and tricky process so it is unlikely that P&J Emporium will suffer for their actions. However, there should be some limit to the barefaced use of designers’ intellectual property. Everyone from Louis Vuitton to Ayesha Farook Hashwani, herself, is used to people selling replicas of their goods. It’s disgraceful that businesses in this country can get away with using other people’s campaigns on their own billboards.

Oxford-grad Salima Feerasta is a social commentator and lover of style in any form or fashion. She blogs at karachista.com and tweets@karachista