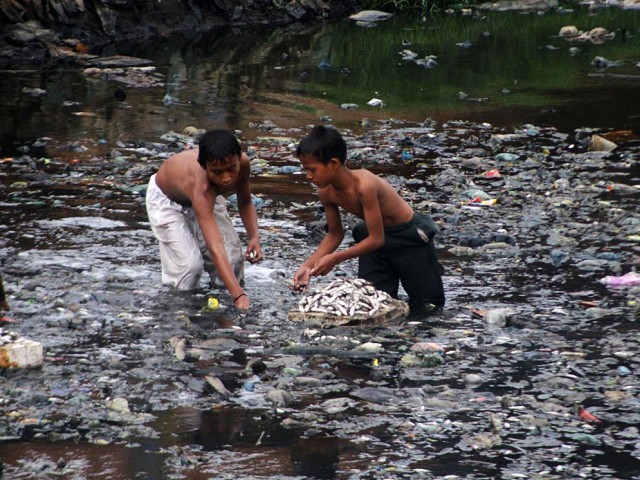 The Marine fisheries Department (MFD) officials said that the massive loss fish, largely comprising of mullets that lives in shallow water and are consumed locally, is a big loss to the community. PHOTO: ONLINE/FILE.

KARACHI: Pakistan Fisherfolk Forum (PFF) chairperson Mohammed Ali Shah has linked the loss of tonnes of fish that washed up on the shores of Karachi on Tuesday to the recent torrential rains.

Expressing concern over the incident, he said that poisonous chemicals streamed into the sea through sewage drains after the monsoon rains.

He said the Sindh local government department and provincial authorities, including the environment ministry, are responsible for this loss.

Shah demanded a probe into the matter and urged the authorities make the findings of its short-term and long-term impacts public. The community should be informed about the kinds of chemicals streaming into the sea with rainwater and their impact on sea water. It may have long term impacts on the bottom of the sea, which is home to hundreds of marine species, he regretted.  Hundreds of endangered species of dolphins, turtles, seagulls, waterfowls and other creatures have a natural habitat in the affected area.

There is no check on the increasing marine pollution, he said, adding that the incident happened because of the apathetic approach of the government authorities, TMAs and city government, as the sea has already been turned into a dumping site. He was of the view that it is a common phenomenon and the fishermen fear that they might lose their source of livelihood as the sea has become poisonous through the dumping of industrial waste.

Sharing information that the PFF volunteers collected, he said despite government claims, industrial units were reluctant to install treatment plants as per the rule to avoid loss to marine ecology.

The Marine fisheries Department (MFD) officials said that the massive loss fish, largely comprising of mullets that lives in shallow water and are consumed locally, is a big loss to the community.

The officials blamed the toxic waste coming from SITE through Lyari River for the death of fish. They also claim to have written letters to fish meat processing units, directing them not to use the dead fish in the manufacturing of products. The purpose is to avoid further loss as poultry is the main consumer of fish meal.

Samples of the dead fish will be tested at the Pakistan Council for Scientific and Industrial Research and at the marine fisheries department’s laboratory to ascertain the cause of death.

Tonnes of fish were found floating dead at Karachi Port Trust area on Tuesday. Many people were seen collecting the dead fish. A large quantity of fish was reportedly sold to factories manufacturing fish meat.

According to some estimates, of the 100 tonnes fish, 30 tonnes had already been taken out and sold before reports of the mass death started pouring in. Many fishermen involved in collecting fish were engaged by the Karachi Port Trust for a clean-up operation.

PFF has suggested controlling the marine pollution and stopping the discharge of industrial and domestic waste through Lyari, Malir rivers and other urban drains. About 435 million gallons of sewage is released daily through these two rivers, causing high levels of pollution. The city has very limited capacity for sewage treatment – about 75MGD per day. It means 85per cent of sewage is dumped directly into the sea without any treatment. This is devastating the marine flora and fauna.